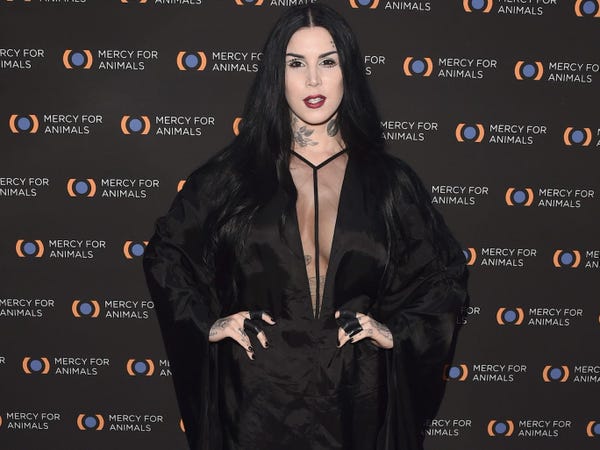 Celebrity tattoo artist Kat Von D is opening up about what she describes as the "most traumatic six months" of her life.

In an Instagram post shared on Monday, Von D said that she had recently watched Paris Hilton's documentary "This is Paris," which details the celebrity's experience at Provo Canyon School in Utah, where she says she was physically and mentally abused as a teenager. Von D said in her nearly 24-minute-long video that the documentary triggered memories of her own experience at the "torturous" institution.

"Thank you, @parishilton for giving me the courage to share about being locked up for half a year, without ever seeing the sun, at Provo Canyon School in Utah," Von D wrote in her Instagram caption.

She added: "I spent those six traumatic months of my teenage years, only to leave with major PTSD and other traumas due to the unregulated, unethical, and abusive protocols of this 'school' — and cannot believe this place is STILL OPERATING."

Thank you, @parishilton for giving me the courage to share about being locked up for half a year, without ever seeing the sun, at Provo Canyon School in Utah. I spent those 6 traumatic months of my teenage years, only to leave with major PTSD and other traumas due to the unregulated, unethical and abusive protocols of this “school” — and cannot believe this place is STILL OPERATING. Please take a moment to watch @parishilton ‘s documentary #ThisIsParis and follow @breakingcodesilence to see other survivors testimonials and better understand the horrors of the “Troubled Teen” industry, and the damage it causes to not just the kids, but the families. 🖤 #breakingcodesilence

At the start of her Instagram video, Von D said that she doesn't like to describe institutions like the one she attended as "schools." Instead, she called Provo Canyon School a "f—ing lockdown facility."

"I was 15 when I was sent, and I spent my 16th birthday in there," Von D said. "So I was there for a total of six months, and they were definitely the most traumatic six months of my life."

According to Von D, a family therapist recommended the school to her parents once Von D began "listening to punk-rock music" and dressing "a little bit different than all of the other kids at school or church." She said she also had dropped out of high school to begin her tattoo career at the time.

Von D later said in the video that she does not blame her parents for her experience.

She went on to say that while sleeping one night, two "big dudes" and one "athletic-built woman" entered her room, told her to get dressed, and advised her to calmly go with them. Von D said they threatened to handcuff her if she didn't do as she was told.

To reach the school, Von D said she boarded a plane with the three strangers and was later blindfolded in a car. From there, Von D said she endured a "completely degrading" strip search in front of another stranger, and was forced to shave her head.

Von D said that after giving blood, stool, and urine samples, she was told by a counselor that she had contracted HIV from her tattoo work — which she said she believed as a 15-year-old. She said she later felt that the diagnosis was a "lie" and "scare tactic" to get her to stop tattooing.

Von D later said in her video that while she "was spared of the sexual abuse and the physical abuse" reported by other previous members of the school, she "definitely saw" others being punished, force-fed medication, and enduring other types of abuse.

Overall, the tattoo artist said that her experience at the institution led her to experience PTSD, and was "the root" of her future alcoholism and drug use; Von D says that she's now 13 years sober.

In an August interview with The Times, "The Simple Life" star said she was beaten, strangled, and forced to take pills that made her feel "foggy." According to Hilton, people at the institution "love to break you down as much as possible."

"It was just terrifying to be in a place every day where people who work there were sadistic and wanted to torture and hurt children," Hilton told The Times about her experience, which she discussed further in her new documentary. "I don't wish that on anyone."

I am so proud that I told my story. The real story of my life and what I have been through. It was very difficult to finally be so open but I'm grateful that I did. So proud to be a part of the #BreakingCodeSilence Movement and put an end to the child abuse that is still happening today. Thank you to all the survivors for reaching out. I am so touched by all your letters and kind messages. Thank you 🙏❤️ Love you all! 🤗 To learn more about this movement and why I am so passionate about it please go to my @YouTube Channel to watch my new documentary #ThisIsParis 🎥

On Monday, Hilton reposted Von D's video on her own Instagram page and said she wanted to "send a huge thank you" to the tattoo artist "for being so courageous, open, and honest" while telling her story.

"In tears watching and listening to what you went through," Hilton wrote in response to Von D. "Bringing back even more of the horrible memories I have blocked out for so many years. I can relate to you in so many ways."

On behalf of all the survivors and myself, I want to send a huge thank you to @TheKatVonD for being so courageous, open and honest telling your story. In tears watching and listening to what you went through. 💔😢 Bringing back even more of the horrible memories I have blocked out for so many years. I can relate to you in so many ways. Like you, I have always felt so ashamed to tell anyone about this. But it's not us who should be ashamed. We were only children. The people who work at and run these places are the ones who should be ashamed. Thank you for helping shine a light with me on this very important movement. No child should have to ever experience anything like this. 💔 And I am going to do everything in my power to shut down Provo and all the other places like it. Thank you for #BreakingCodeSilence 🙌 This is going to empower so many other survivors to let them know they are not alone and also expose these evil people. You are so brave, inspiring, strong and beautiful. I am so proud of you and so happy to have connected with you. I know that by you, myself and all the other survivors coming forward with their stories is going to make an impact and stop this from happening to other children. Sending you so much love and gratitude. 🙌 Love you #SurvivorWarrior! And to anyone reading this please help support our movement and go sign the petition at www.changedotorg/shutdownprovo 🙏 #UnitedWithOneVoice #iSeeYouSurvivor #BreakingCodeSilence 🙌

Hilton added that "no child should have to ever experience anything like this," and said that she will continue to work toward "shutting down Provo and all the other places like it."

Representatives for Kat Von D, Provo Canyon School, and Paris Hilton did not immediately respond to Insider's request for comment.