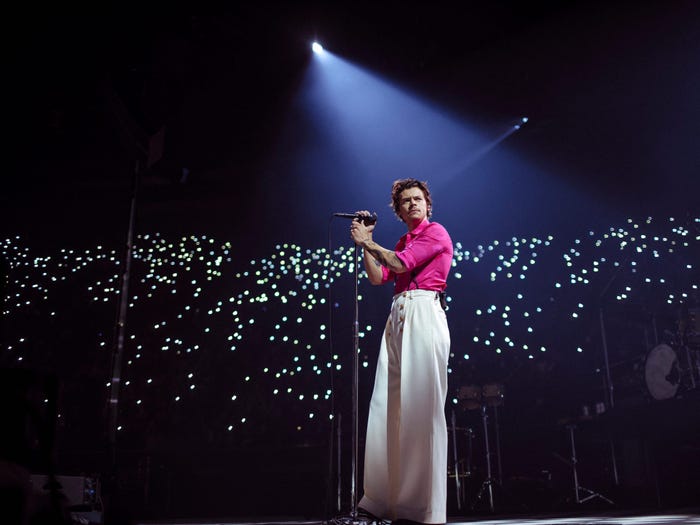 When I first heard people buzzing about the "groundbreaking" December cover of Vogue featuring Harry Styles in a Gucci dress, I was confused.

What I saw when I looked at the cover was a missed opportunity. After reading the profile, I was left even more dumbfounded. Why is this the cover story? What am I learning here? What's the point?!

Before we go any further, let me clarify that it's not unworthy because of who Styles is as a person — my problem is with the choice of Styles as the cover star in this history-making magazine issue.

I am absolutely uplifted and excited by the fact that a man can cover Vogue in a dress now and people will celebrate it. And I am thrilled for Styles that he can go confidently into the world wearing something he feels (and looks!) absolutely wonderful in. That, in my view, is the whole point of fashion to begin with.

But I think it's irresponsible and counterintuitive to not acknowledge the parts of this progressive moment that are, well, missing.

Styles is being touted as a 'revolutionary,' but that's hardly the case

My frustration lies not with the former One Direction member, but with the seemingly unanimous conclusion drawn by everyone involved in the making of this cover story that the singer is a revolutionary figure for loving what would traditionally be labeled as women's clothing.

Gucci's Alessandro Michele was quoted in the piece, saying Styles "is the image of a new era, of the way that a man can look."

Stylist Harry Lambert was also quoted in the feature, similarly noting: "He's a big inspiration to a younger generation — about how you can be in a totally free playground when you feel comfortable. I think that he's a revolutionary."

I just can't comprehend how Styles can be seen as a "revolutionary" when so many marginalized people have been mocked, ostracized, beaten, and even killed for doing the same thing he's done.

Not only did the Vogue story tout Styles as the frontrunner of this "revolution," it almost entirely ignored any credit that's due to the actual leaders, both dead and alive, of the gender-nonconforming fashion movement.

Marsha P. Johnson, a self-proclaimed drag queen and prominent figure in the Stonewall uprising, was possibly the most famous of that cohort. Countless trans people of color have followed in her footsteps — and faced extreme, often fatal, backlash for it.

Experts have deemed violence against the trans community an "epidemic," López reported. In June, more than 15,000 people marched in New York City to show their support for Black trans lives — a relevant set of facts that were completely left out of the Vogue piece.

Vogue made just one mention of the social and civil unrest — which includes Black Lives Matter protests after the killings of George Floyd and Breonna Taylor and also encompasses marches to protect Black trans lives — that has taken center stage in 2020:

Styles told Bowles he is "learning and listening," which is great, but Bowles doesn't follow up on that at all or draw any connection between Styles' response to the Black Lives Matter movement and his fashion choices. So what's the point of even mentioning the movement in the profile if only to gloss over it?

To me, it feels as if mention of America's racial injustice was just shoe-horned in, and it comes off as a missed opportunity to talk about the ways the Black trans community has broken ground in the gender-nonconforming fashion Styles loves.

While the importance of Styles' fashion choice shouldn't be dismissed or trivialized, it feels strange to be heralding a white man who has not identified himself as anything other than cisgender and straight (despite plenty of purposeful ambiguity on his part) as the leader in the gender-nonconforming fashion movement.

To be clear, Styles may very well be non-cis and non-straight, and he doesn't owe it to anyone to comment on his sexuality or gender. He told The Guardian in 2019 that he believes "sexuality's something that's fun. Honestly? I can't say I've given it any more thought than that."

But it feels irresponsible to highlight him over — and, frankly, ignore — those who have truly pioneered this movement and worn their gender nonconformity loudly and proudly in the face of extreme, and often deadly, backlash.

Alok Vaid-Menon, a gender-nonconforming writer and performance artist, shared their thoughts about the cover in a post on Instagram.

"Am I happy to see Harry be celebrated for openly flouting gendered fashion norms? Yes," they wrote in the now-viral post. "Do trans femmes of color receive praise for doing the same thing every day? No."

They went on to acknowledge that while this is a sign of progress away from the former rules of binary gender and the fashion industry, white men should not be the face of gender-neutral fashion.

"We are still dismissed as 'too much' and 'too queer' because we aren't palatable enough to whiteness and heteronormativity," Vaid-Menon wrote.

When contacted by music reporter Callie Ahlgrim for an earlier Insider story regarding the response to Styles' Vogue cover, Vaid-Menon declined to offer any additional comments but gave Insider permission to cite their post through their manager.

Others took to Twitter to express similar thoughts and air their grievances with Vogue.

In a statement emailed to Insider, Bowles explained the choice to feature Styles: "Our decision to cast Harry as Vogue's first solo male cover star in the magazine's 128-year history has been vindicated by the extraordinary response — an overwhelming outpouring of support and love for a thoroughly modern rule-breaker who shows us what being a man in 2020 can mean."

Vogue strayed from its status quo in the most status quo way possible. It's a bit like the editors were weaning us off of having cisgender, mostly white women on their cover rotation rather than tearing up norms right there in front of our faces and saying, "Look at this! This is important! This is what you should learn about at this moment in time!"

I wondered what the intention behind this cover story was. Was Vogue trying to break its own mold and throw a man on there? Was the staff actually trying to highlight Styles and a new project he's working on? Were the editors using his love of androgynous style to stray from their own status quo as a legacy book?

Yes, it's true that Vogue has never featured a man solo on its cover before. But that's long overdue. Why is it so wonderful that after more than a century of publication, the editors strayed ever so slightly from their norm and in such a safe way?

And by the way, has everyone forgotten that we started 2020 obsessing over Billy Porter's fabulous fashions?

Porter wore a Christian Siriano tuxedo dress on the Oscars red carpet in 2019 and turned heads. While Porter has been wearing statement-making looks for years, he was particularly buzzy on social media at the start of 2020 with his political statement-making accessories.

Porter's popularity continued even through the beginning months of quarantine when fans recreated his 2019 Met Gala look at home — you know, before everyone got distracted and started making banana bread.

Given how many years the "Kinky Boots" actor has been making waves on red carpets, and after living through the last eight months of possibly the loudest calls to action on racial equality this country has ever seen, I would have loved to have opened Instagram on that November morning and seen Billy Porter, a gay Black man with a long history of gender-nonconforming fashion, on Vogue's cover.

In my eyes, if anyone has earned the status of 2020's style icon, it's Porter.

This isn't to say that we shouldn't applaud Styles for his fearlessness when it comes to dressing, because it is exactly that: fearlessness and courage.

Porter even told Insider's Anneta Konstantinides of his own fashion evolution: "What you're seeing is a human being emboldened by their own self-acceptance who can stand grounded on their own two feet and be authentic."

Vaid-Menon put it better than I could when they wrote, "We can both acknowledge this unprecedented moment while also remembering that it could only happen because of the resistance of trans femmes of color."

So, even though I celebrate and support Styles and his courage to defy gendered fashion norms, I have a hard time patting Vogue on the back for this one.

Vogue is going to have to do better next time, and every time after that.

Adidas’ Adistar Sneaker Is In It For the Long Runs