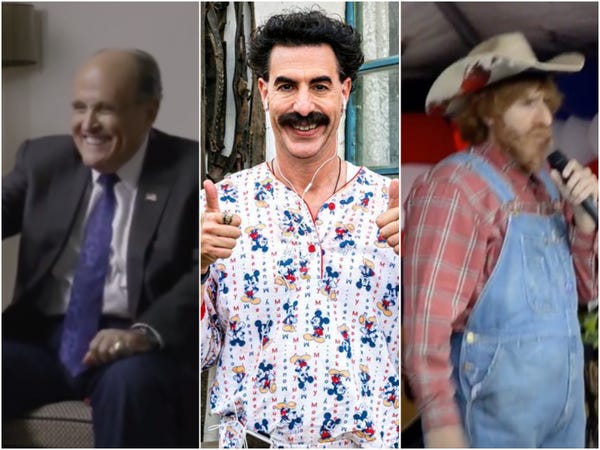 Sacha Baron Cohen's "Borat 2" has been a huge hit. Not only have "tens of millions" of people watched the movie, according to Amazon Studios, but the pranks and stunts involved in the film have been discussed endlessly online.

The sequel to 2006's "Borat" was filmed mockumentary style and wasn't easy to make. In fact, the pranks required a ton of work and a hell of a lot of courage on the part of actors Baron Cohen and Maria Bakalova, who plays Borat's 15-year-old daughter Tutar.

In "Borat Subsequent Moviefilm," Baron Cohen portrays a fictional Kazakh journalist, who wants to offer his daughter Tutar to Vice President Mike Pence as a gift from his native country.

Ranging from a "fertility dance" at a debutante ball to that Rudy Giuliani interview to a pro-gun rally riot, the movie seemed like a dangerous one to make.

Baron Cohen has given several interviews detailing just how these scenes came to life. We've gone through his interviews and found the craziest things that happened while filming "Borat 2." 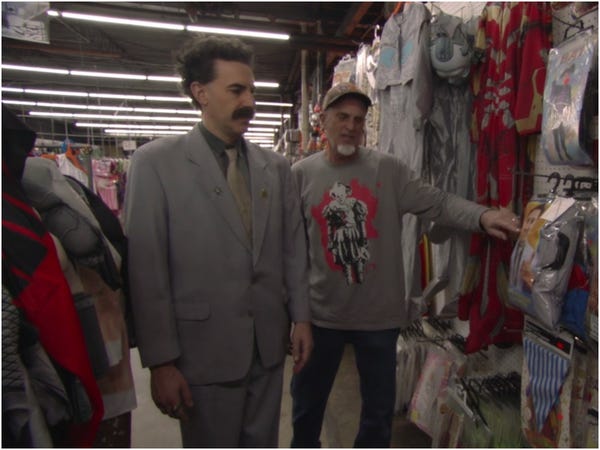 One of the earlier scenes in the movie involves a costume shop, as Borat finds himself in need of disguises as he's recognized by people on the street.

So Borat heads to costume shop, Halloween Highway, where staff member Paul Holzberger told a local Fox News station in Greenville, South Carolina that he didn't know that Borat was a fictional character. In fact, the staffer said he was "very surprised" he was in the film.

Holzberger added that the skit involved Borat "trying to disguise himself because was in trouble or something." 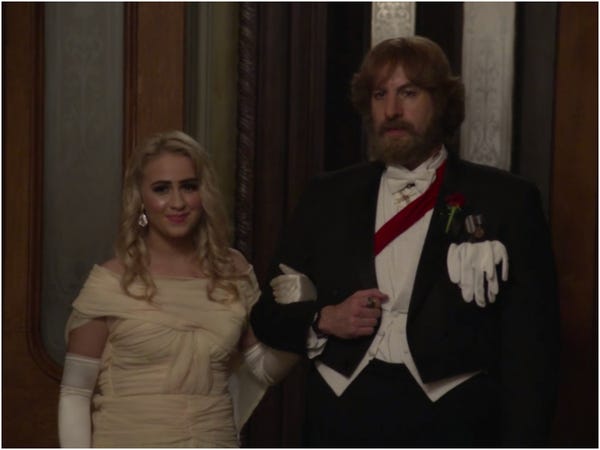 One of the most cringe-worthy moments of the movie comes when Borat and Tutar attend a debutante ball, disguised as Professor Phillip Drummond III (who weirdly seems to be named after a character from the 1978-1985 sitcom "Diff'rent Strokes") and Sandra Jessica Parker Drummon, respectively, which is clearly a nod to "Sex And The City" actress Sarah Jessica Parker.

This ball was staged in Macon, Georgia and attendees knew that the ball was being filmed. They just didn't know it was for "Borat 2."

One father in attendance, Will Davis, wrote about the experience for the Munroe County Reporter, a local Georgia newspaper.

"The movie company sent us a nice email asking us to take a short online quiz as we prepared for the big show," Davis wrote. "Mostly it tested our knowledge of pop culture, asking if we could identify icons like Will Ferrell (no), Sacha Baron Cohen (no) and Mike Huckabee (yes)." 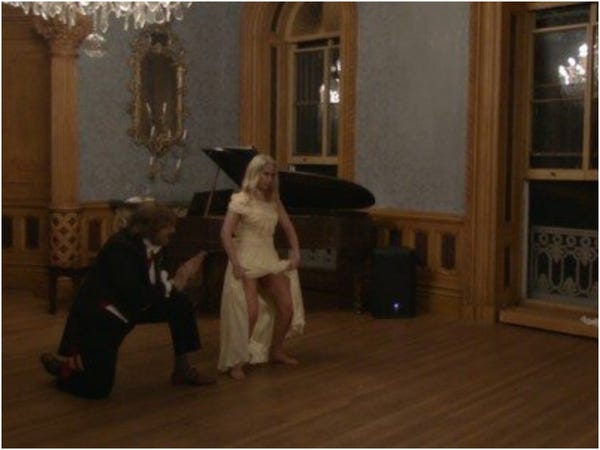 The ball eventually climaxed when Tutar tells Borat that her "moonblood" has started. Borat is enthused by this and says it is their chance to "wow" the guests with a "traditional fertility dance." Borat and Tutar then begin performing the dance, which involves some pretty graphic imagery.

Davis, who attended the ball with his daughter, wrote about watching this dance, noting that many of the attendees stormed out during this performance.

Davis wrote: "They began dancing side by side in sync when suddenly the 'daughter' lifted her hoop skirt, gyrating and revealing no underwear. That's when all of us, who were sober marched to the checkout desk, demanded our phones back and hit the road." 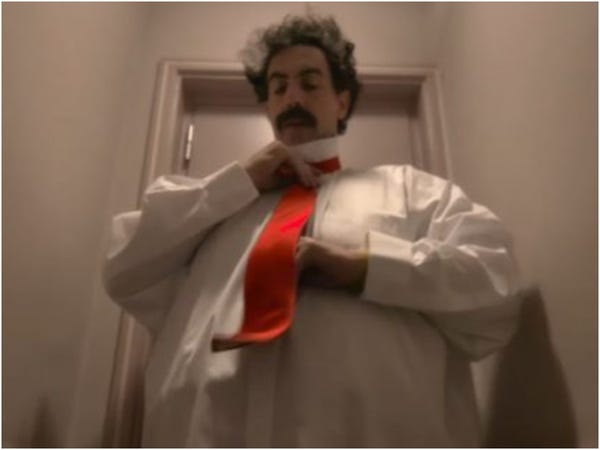 Baron Cohen broke into the Conservative Political Action Conference back in February for a prank on Vice President Mike Pence, shown in the film. But it was pretty hard to get in.

First, the metal detectors went off when security checked him, meaning he almost got denied entry. Baron Cohen's quick thinking helped, however, and he improvised an excuse to security, saying the detectors went off because he had a defibrillator, which security believed.

Baron Cohen then had to have tons of patience to get the opportunity to break into the room for his prank.

"I ended up hiding in the bathroom, listening to conservative men go to the toilet for five hours until I broke into the room," Baron Cohen told The New York Times. "We were surrounded by Secret Service and police and internal security."

In the movie, Borat changes into his Trump costume in the bathroom and then carries Tutar over his shoulder through the event, breaking into the room where Pence was giving a speech. Borat shouts that he has a present for Pence, holding up his 15-year-old daughter. 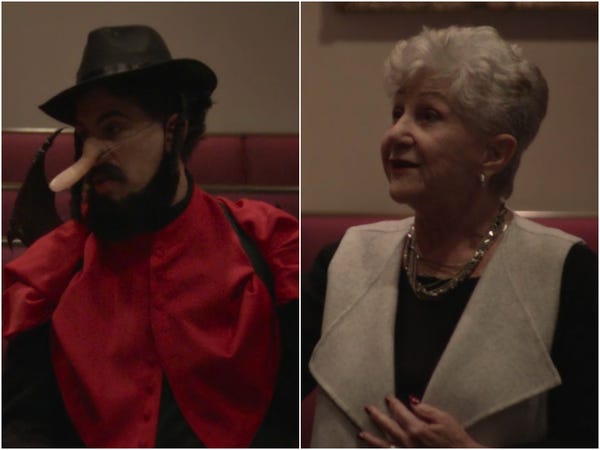 The movie features a couple of surprisingly touching moments, one of which revolves around Holocaust survivor Judith Dim Evans. How the movie gets to this point is a little more typically "Borat," however.

Borat dresses in a very anti-Semitic outfit and enters a synagogue after deciding to accept death or, as he put it, go "to the nearest synagogue and wait for the next mass shooting".

Instead of reacting with anger or disgust, however, Dim Evans and her friend Doris treat Borat with kindness and try to educate him.

Considering the level of ignorance on display, however, Baron Cohen made a highly unusual move and broke character to tell Dim Evans that the jokes were intended to raise awareness on anti-Semitism rather than to be anti-semitic themselves.

Dim Evans died last summer and never got to see the finished movie, but her estate filed a lawsuit against the movie's creators. As reported by the Independent, her estate claims that Dim Evans thought she was appearing in a serious documentary rather than "a comedy intended to mock the Holocaust and Jewish culture." However, Deadline later reported that the lawsuit has now been dismissed.

The movie itself is dedicated to Dim Evans, with a tribute to her appearing in the post-credits. 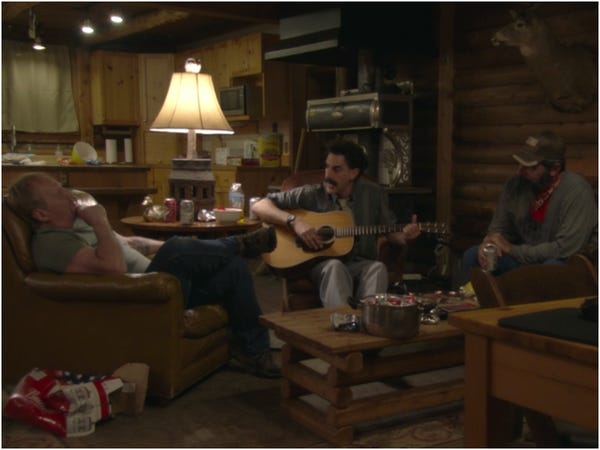 During the movie, which was also affected by the coronavirus pandemic, Borat had no choice but to seek refuge with conspiracy theorists and QAnon believers Jerry Holleman and Jim Russell.

He ended up quarantining with the duo for five days, meaning Baron Cohen couldn't drop the Borat act for one second.

"The hardest thing I had to do was, I lived in character for five days in this lockdown house," the actor told The New York Times of filming the scene. "I was waking up, having breakfast, lunch, dinner, going to sleep as Borat when I lived in a house with these two conspiracy theorists. You can't have a moment out of character." 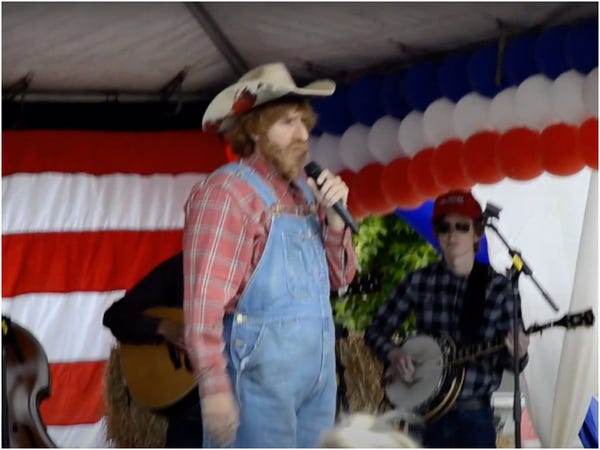 In this stunt, Borat dresses up as a country music singer while searching for Tutar at a March for Our Rights rally in Olympia, Washington. Onscreen, Baron Cohen sings the "Wuhan Flu" song he made up in quarantine with Jerry and Jim, which the crowd took to and eventually sang along.

Baron Cohen told Stephen Colbert, however, that Black Lives Matter protesters came over to confront the militia groups in attendance at the rally and recognized Baron Cohen.

"One of them went, 'Oh my God, it's Sacha Baron Cohen!' Word got out that it was me, and then the organizers and a lot of people in the crowd got very angry," he recalled to the late night host. "They tried to storm the stage. Luckily for me, I had hired the security, so it took them a while to actually storm the stage."

Baron Cohen also wrote about this experience in a recent op-ed for Time magazine: "I rushed to a nearby get-away vehicle. An angry crowd blocked our way and started pounding on the vehicle with their fists."

The filmmaker wrote that underneath his overalls and costume as the country music singer, he was wearing a bulletbroof vest. But this protection "felt inadequate with some people outside toting semiautomatic weapons."

"When someone ripped open the door to drag me out, I used my entire body weight to pull the door back shut until our vehicle manoeuvred free," Baron Cohen said. "I was fortunate to make it out in one piece."

Baron Cohen listened in on the Rudy Giuliani interview in a hideaway spot, and only knew what was going on through text messages 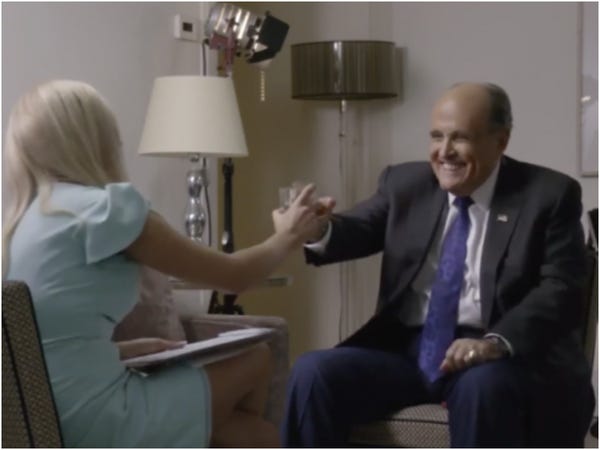 The climactic scene of the movie is also the film's biggest prank. Of course, it is the infamous Rudy Giuliani set up.

In it, Tutar, now a young journalist, is interviewing Giuliani, and Borat is trying to stop her from giving herself away to the President's personal lawyer.

Offscreen however, it was extremely difficult for Baron Cohen to be present for this scene. The filmmaker told Colbert that Giuliani's team did a security check of the entire hotel, so he and his team had to build a six-foot by three-foot hideaway in the closet of the hotel room so Baron Cohen could hide and not be detected.

"And I've got a little internal lock and it's pitch black in there. [His team] does a sweep and then leaves the room and then the security guard sits outside the room ensuring that no one could come in or out, which is actually even more scary when you think about it for her," Baron Cohen told Colbert of the scene.

The filmmaker also had another problem. In the hideaway, his only means of communication with the director was through a phone that had 3% battery.

"Hold on, we've got Rudy Giuliani. We've got the president's lawyer. We've got this scene — this is the climax of the movie — and no one thought it might be worth charging the phone?" Baron Cohen told Colbert. "So I managed to keep it on airplane mode and occasionally check in."

'The Revenant': Leonardo DiCaprio Couldn’t Comprehend His Bear-Fighting Scene When He First Read the Movie Script — 'Do I Give Him a Right Hook?'

'The Revenant': Leonardo DiCaprio Couldn’t Comprehend His Bear-Fighting Scene When He First Read the Movie Script — 'Do I Give Him a Right Hook?'

4 hours ago
We and our partners use cookies on this site to improve our service, perform analytics, personalize advertising, measure advertising performance, and remember website preferences.Ok