Danielle Candela is the owner and operator of Tote Taxi. Part personal assistant, part chauffeur, her three-year-old firm is based in Southampton, New York. It focuses on shuttling deliveries back and forth between the Hamptons and New York City. The 30-year old grew up in the area, but was living and working in Manhattan when she came up with the idea, tired of hauling her bags back and forth when visiting her parents.

Tote Taxi operates year-round, with the bulk of summer business focused on taking items from Manhattan to the Hamptons; in winter, it reverses course and mostly brings items from the Hamptons into the city.

Since many folks moved out East in early spring as a result of COVID-19, those rhythms have been disrupted in 2020 — and as a result, Candela's business has boomed.

Here's what a typical summer weekend day looks like for her, catering to the countrified 1% during the pandemic.

Candela starts her day with a moment of gratitude. 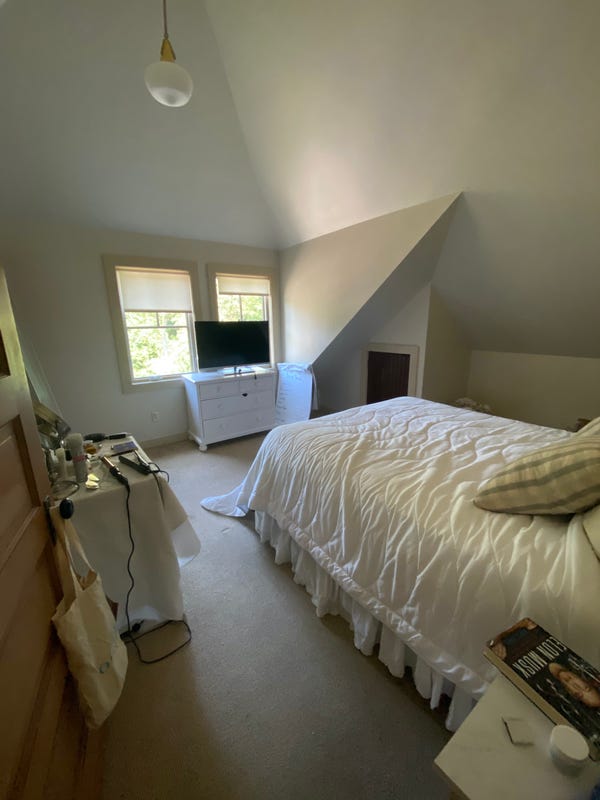 She get up just after 7 a.m. and skips breakfast in favor of hot water and lemon. She doesn't rush into her day, though, but pauses to write down everything she's grateful for in a journal.

"During the pandemic, it's difficult for everybody and I'm trying to start the day off right," Candela said.

The first task of the day: building her glam bags. 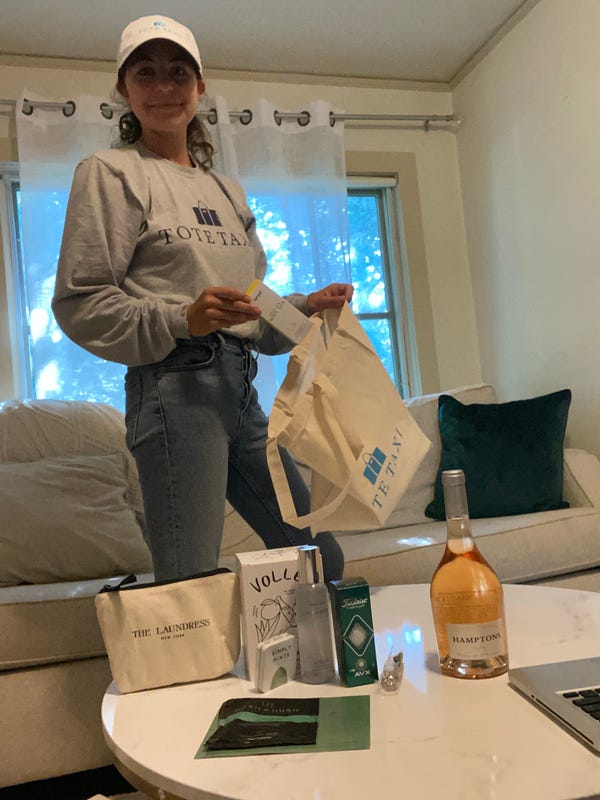 "Tote Taxi isn't just a delivery service, and I wanted to be able to offer something you're not going to get from a Man in a Van," she said of the goodie bags that she gifts clients as part of the delivery. "Who doesn't like free stuff?"

Partners like Supergoop Sunscreen and Laundress detergent have donated samples for the bags. Candela also includes a handwritten thank you note to each client.

By 9 a.m., she's meeting her driver to run down the day's itinerary. 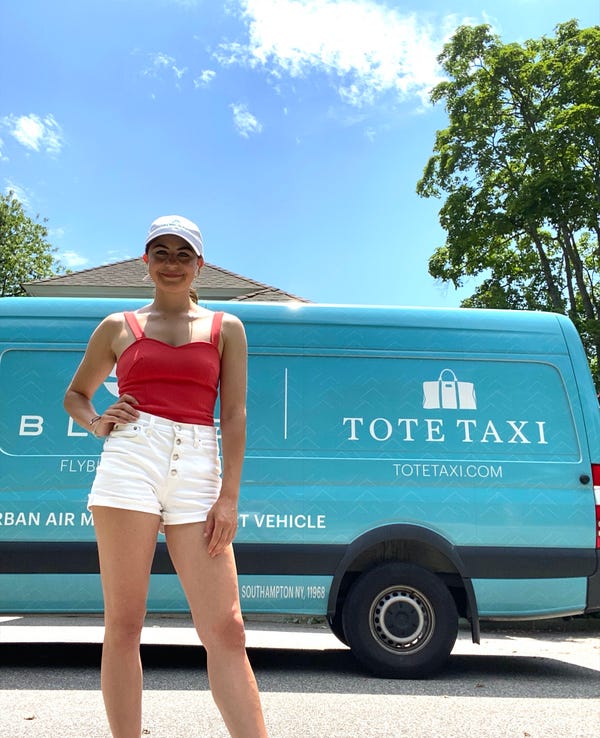 Tote Taxi's main vehicle is a Mercedes Sprinter van, and she has one driver for the van. Candela also has five other drivers on call whom she can tap to use their own vehicles when the schedule is busy or who handle smaller jobs. This season, that's often involved doing mail pickups from doormen in the city and ferrying letters and packages out East to folks who've moved there during the pandemic.

Candela always meets her main driver at the office.

Cargo for Tote Taxi is eclectic, and there's no such things as a 'typical' order for the company. 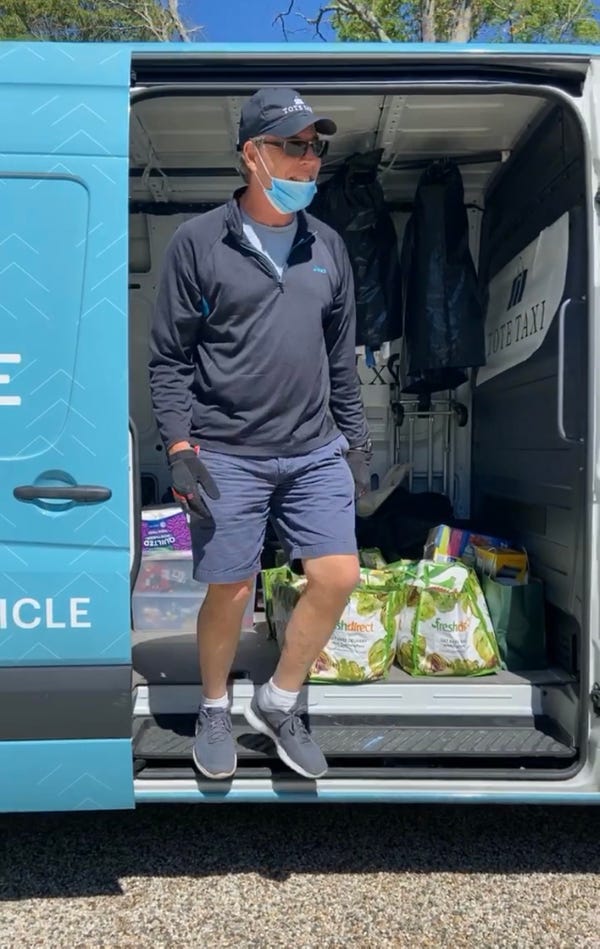 There are still many suitcases to bring from the city to Long Island, or vice versa, but other, more unusual items also number among her orders. Candela said one Instagram influencer forgot her favorite selfie mirror and booked passage for it personally. In the early weeks of the pandemic, when toilet paper was in short supply, Candela often found she was discreetly bringing a client's stash from the city out to their country rental.

Private chefs in Manhattan have also relied on her to deliver their dishes to clients. And of course, she's also picked up and delivered sets of forgotten keys.

It's been a long week, so Candela opts for a two-hour tennis clinic to decompress. 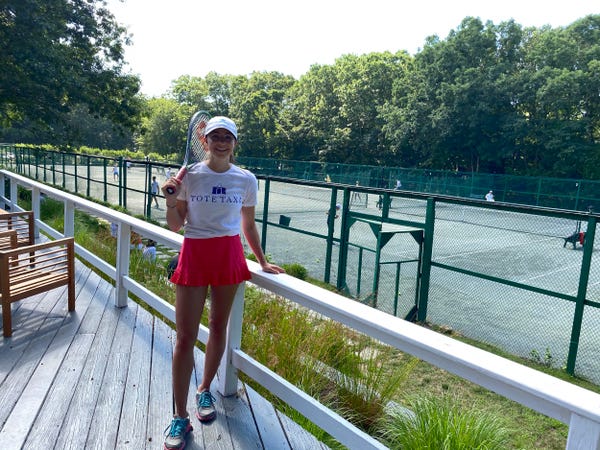 She's no pro, but she is a keen amateur. Candela recently signed up for this class at the Southampton Racquet Club as a way of ensuring she took time to exercise even amid the most frantic summer weeks.

Next up: an unexpected bonus workout. 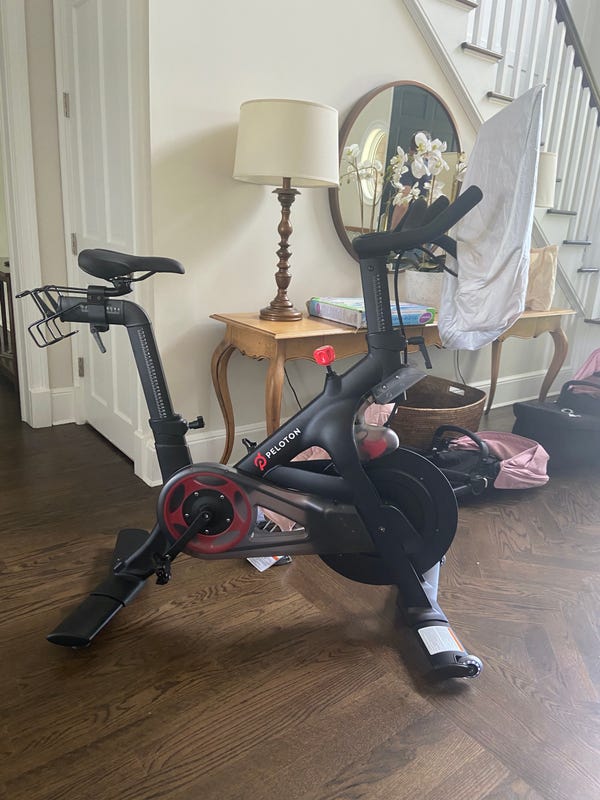 On this particular day, Candela gets some additional exercise thanks to a Peloton – though not in the way you might expect.

The home exercise bike has been a hot commodity during lockdown in the Hamptons; clients have tasked Tote Taxi with moving it from their rental home to their city apartment, or back again.

The company charges $350 to transport one Peloton bike from the Hamptons to the city.

Candela drove to Watermill to help the driver fit the Peloton into their van. After 50 or so bookings like this so far this season, she's learned it takes two people to move the heavy bike. 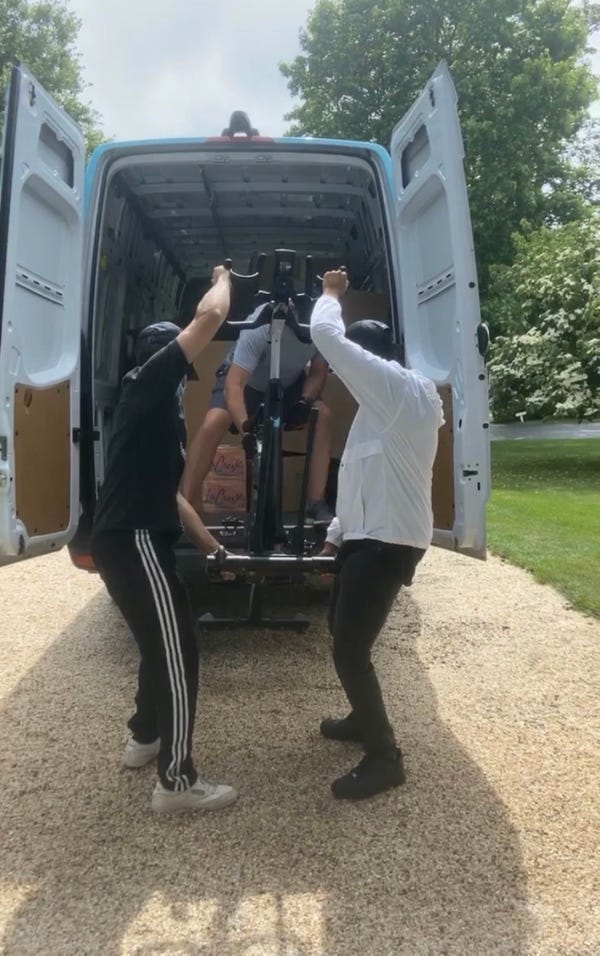 "The gyms are still closed, and Pelotons are on back order, and they want to work out at home with their bike," Candela said.

Later, Candela meets some local friends at her favorite restaurant. 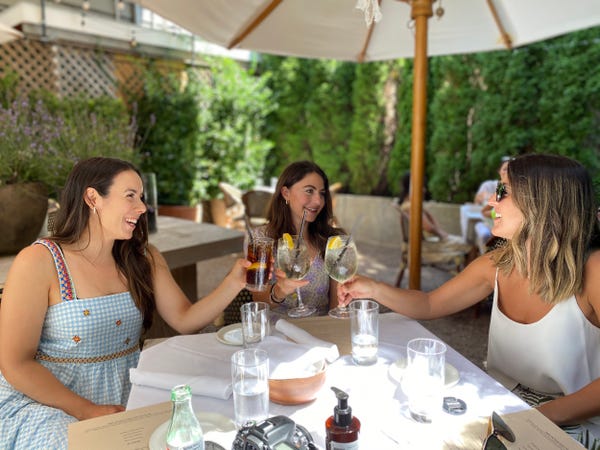 She spends an hour and a half or so at Tutto Il Giorno, the Italian spot in Southampton Village that's one of her staples. She gets together there with a few other local friends, all of them entrepreneurs like her, to swap stories and ideas.

"Even though we're in different industries, we like talking about new ideas, like how to expand," she explained. It's fun, but definitely business, especially as she's driving: "Oh it's a sober brunch – no mimosas."

Most of the afternoon is spent on admin work, especially prepping the next week's schedule. It's a good four hours of logistics. 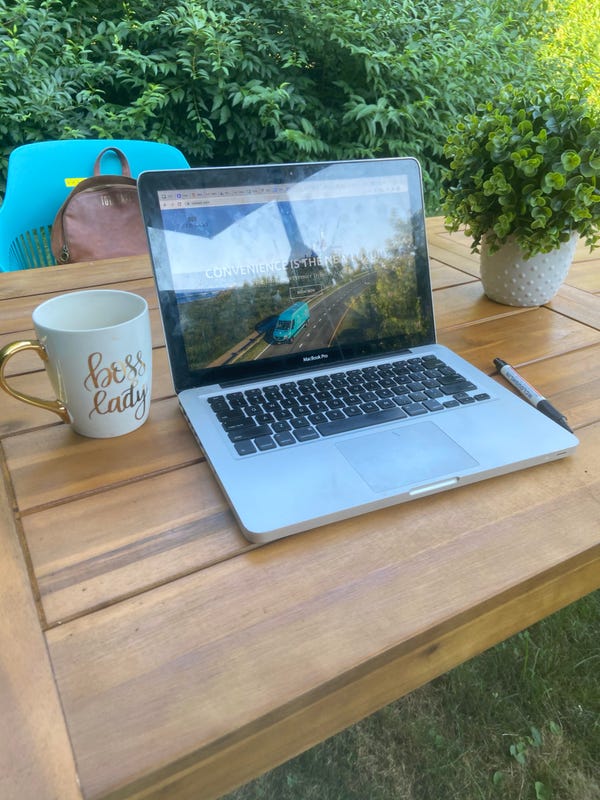 She's constantly checking social media: Candela said most of her bookings come via Instagram DMs, even though she now operates a website that accepts bookings.

She also operates a local delivery service for high-end stores, like Theory in Southampton. Clients can have a socially distanced personal shopping appointment via FaceTime and Tote Taxi will deliver whatever they buy in a same-day service.

The mini-move has been a huge part of her business in 2020. 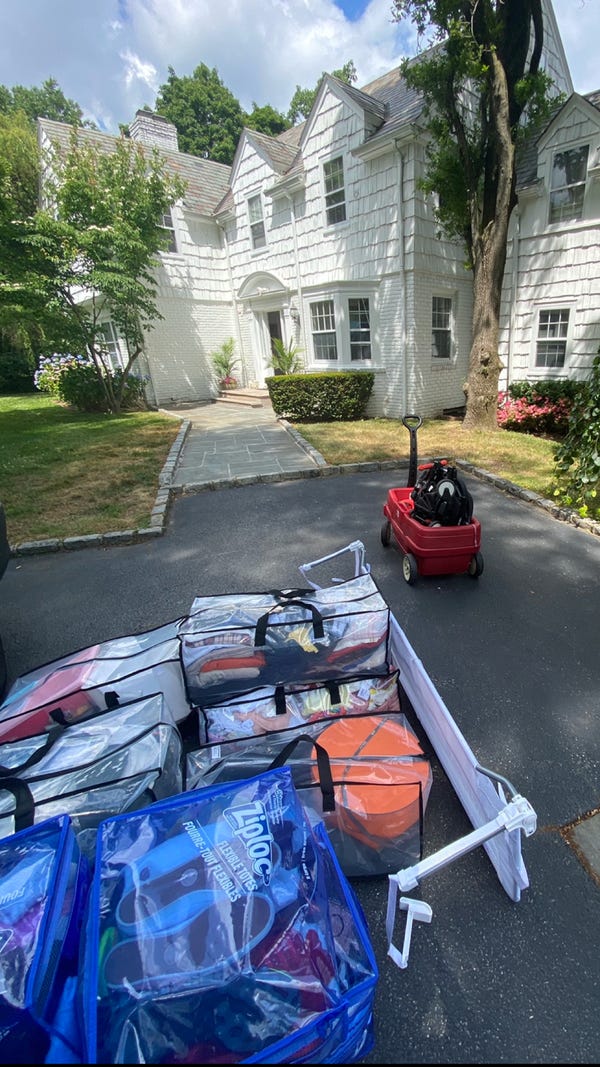 As the end of the month nears, much of Candela's schedule is filled with "mini moves," toting luggage and kids' toys. In the past, that would have entailed people leaving their rentals to move back to the city, but not this year. 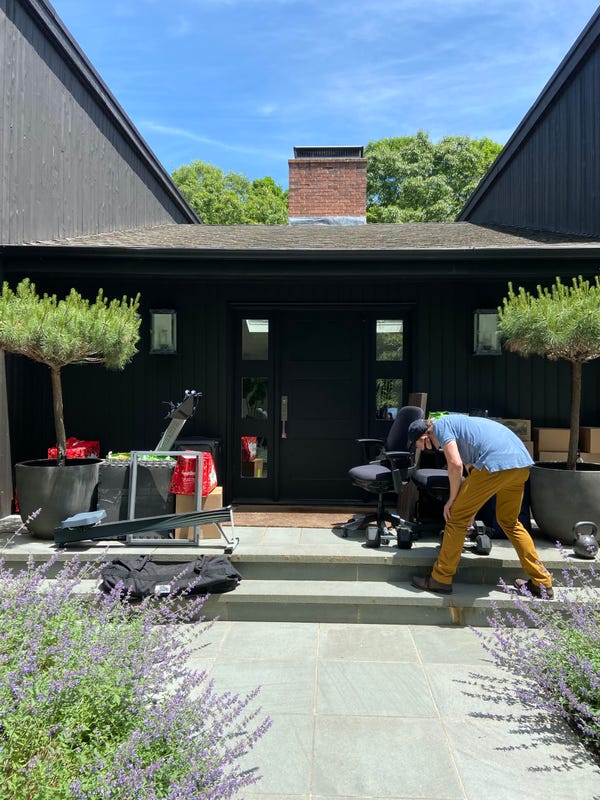 The prime time for her three-year-old firm has typically been early May through mid-September, the rental season.

But in 2020, bookings exploded on the weekend of March 14, when the first international travel ban began to kick in. It's been frenzied ever since. The major difference for 2020 is that business is consistent throughout the week, rather than focusing on Fridays and Mondays as it typically had been.

Candela predicts the Hamptons frenzy might continue beyond September, too. 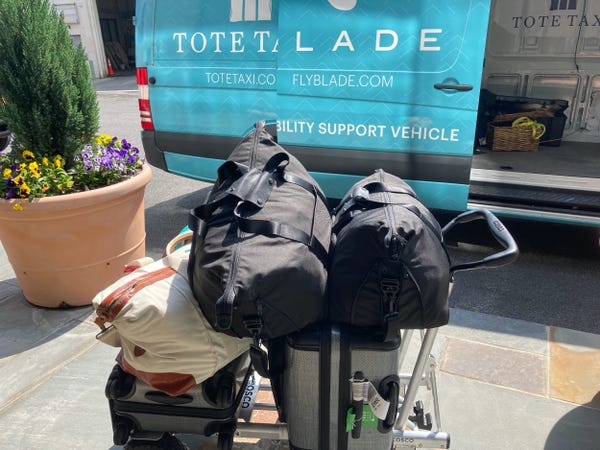 Candela's clients seem unsure of whether or not to return to the city at summer's end and often book mini moves to shuttle between other homes.

"I have a client who booked us for Friday next week, and she doesn't know where she's going: maybe a new Hamptons house, or her mother's house in Syosset or back to the city," Candela said. "Nobody knows what they're doing right now."

This year, she's expanded her business beyond Long Island as a direct result of the pandemic. 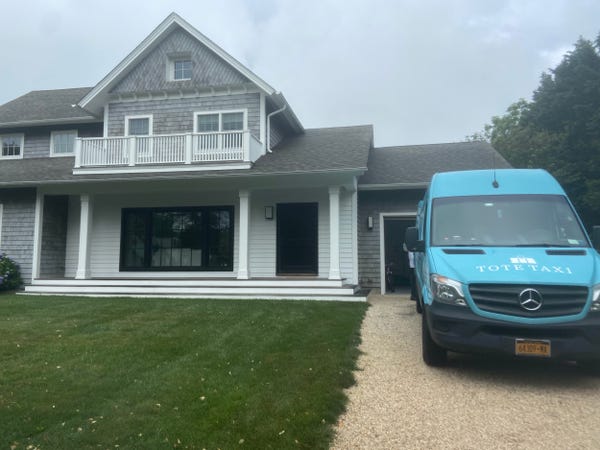 Candela still accompanies her driver on some deliveries and talks to clients herself to learn more.

On one such trip, a wealthy client explained that in the early weeks of the pandemic, her son and his pregnant wife had moved out to the family compound in Greenwich, Connecticut. Come summer, they headed to their Hamptons home.

That conversation served as the inspiration for Candela's company's expansion, and now Tote Taxi operates in Greenwich and Westchester, New York, too.

By 6 p.m., Candela is ready to decompress with a drive-in movie. 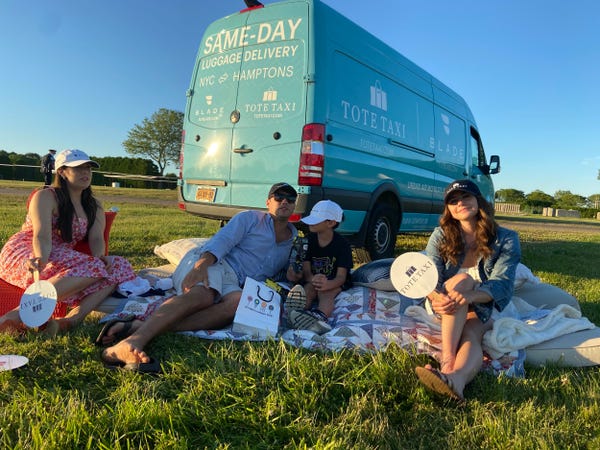 Galas and events might be on hold, but there's still a social scene in the Hamptons, like the pop-up drive-in at Bridgehampton's Classic show grounds where Candela watched "Artemis Fowl" with friends. Candela went with two friends plus another pal and his 7-year-old son, setting up a picnic blanket outside her van.

"Tote taxi parked in the back, not to obstruct anyone's view," she explained.

Andrews pressed on handling of pandemic in parliamentary committee

45 mins ago
We and our partners use cookies on this site to improve our service, perform analytics, personalize advertising, measure advertising performance, and remember website preferences.Ok