Burn the Floor is celebrating 20 years with a sparkling show of dance that takes ballroom by the shoulders and shakes it out into the 21st century.

A company of 15 dancers offer a variety of individual strengths, from elegant to acrobatic, but works smoothly as an ensemble in which every performer delivers at the highest levels of skill and energy.

While glimpses of old-fashioned ballroom partnering are there to be savoured – my favourite was the Latin American Oye Come Va – they are more likely to break into contemporary show dance. 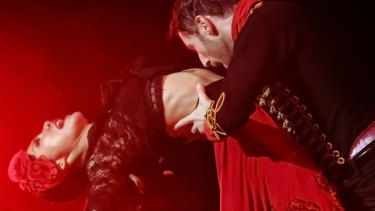 Burn the Floor takes ballroom by the shoulders and shakes it out into the 21st century.

That in itself has some surprises, like an aria from Bizet’s Carmen springboarding a richly costumed item that offers variations on the opera score, before moving on to Objection and Stairway to Heaven, which brings us to the heroine’s death – make of that what you will.

With onstage vocalists including Vika Bull and Sydney Conservatorium of Music students, there are standards like Hallelujah, Mr Bojangles and A Little Help From My Friends. Floating drapery emphasises soft movements in Natural Woman. Fashionably retro gear from ancient Rome or some timeless, imagined world sets the scene for sharper, more aggressive choreography over several numbers.

The character of the choreography will seem familiar to viewers of TV’s Dancing with the Stars, which gets its own featured spots that obviously struck a chord with the large, enthusiastic audience.

Peta Roby is the show’s director – congratulations for a seamless production on the tricky Concert Hall stage – and shares the credit for the choreography with Jason Gilkison. While this is perfectly adequate, with high-kicking legs, some spectacular lifts and an exciting attack that devours the stage with dazzling speed, it is repetitive. And for once, the men get the best of it, looking like they have the most fun as well.