The coronavirus pandemic will leave the federal budget with cumulative deficits of $1 trillion over the next decade and even higher levels of debt, with the only way back to surplus through politically dangerous spending cuts.

A report by the independent Parliamentary Budget Office on the medium-term outlook for the budget reveals the recession will leave the economy 7.5 per cent, or $258 billion, smaller by the end of the decade, taking a devastating long-term toll on the nation's finances. 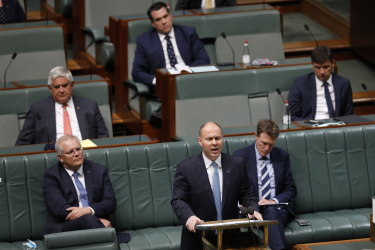 Josh Frydenberg hands down this year’s budget in October. The budget office expects cumulative deficits caused by this year’s recession of more than $1 trillion over the next decade.Credit:Dominic Lorrimer

It also suggests the Morrison government's already-legislated tax cuts, due to start from 2024-25, will leave only the top-paid 20 per cent of workers better off as tax rates increase for the other 80 per cent of the workforce.

Treasurer Josh Frydenberg forecast a record deficit of $213.7 billion for 2020-21 in the October budget, and a huge rise in both gross and net debt. Gross debt is already at $812.6 billion.

The PBO analysis outlines the expected deficits for each year, projecting the budget to show a shortfall of $51.5 billion in 2030-31.

The cumulative deficits run up following the coronavirus pandemic are estimated at more than $1 trillion by the PBO. In its analysis last year, it projected cumulative surpluses worth $274 billion over almost the same period.

Net debt was expected to have fallen to $51.8 billion at the turn of the decade. The PBO now expects it to reach $1.3 trillion in 2030 and keep rising.

The turnaround is due to a rise in government spending and a collapse in revenue caused by the pandemic that ripples through the economy. Low inflation and slow wage growth have also punched holes in the budget.

The government has come under pressure from the business community to cut the corporate tax rate, but the budget office found government coffers will receive far less in company tax relative to personal income tax.

"While governments have a high degree of control over their revenue, ongoing downward trends in indirect tax receipts as a share of GDP mean that income taxes, particularly from individuals, will provide a larger share of government income under current policy settings," the office found.

The analysis covers the introduction of the third stage of the government's personal income tax cuts that are due to start from mid-2024.

"The effects of the stage three tax cuts legislated for 2024-25 are substantially more beneficial to those in the higher-income quintiles, resulting in those taxpayers being the largest overall beneficiaries of the tax cuts," it found.

As a proportion of GDP, spending will still be at 26.1 per cent in 2030-31, higher than the peak reached under the Rudd government in its response to the global financial crisis.

It leaves any future government wanting a surplus any time over the next decade facing cuts to spending. The single largest government expenditure remains the age pension, which by the end of the decade will account for almost one in every $10 of spending.

The budget office said despite the sharp increase in debt it was manageable, in part because interest rates on government debt had fallen to record low levels.

On Thursday, a portion of $1.5 billion of debt was sold at an interest rate of minus 0.01 per cent, the first time Australian government Treasury notes had been sold at a negative rate. About a third of all global government interest rates are currently negative.

The buyer of the debt will lose money on their investment, which will be repaid in March next year.

"Interest rates are currently highly favourable and government debt is largely ‘locked in’ at these rates for the next decade," the PBO said. "Provided interest rates on government debt remain on average lower than economic growth, then debt will reduce, albeit slowly."

Paris Hilton Explained Her Voice and 'The Simple Life' Persona in 2011: 'It's a Character I Developed'
Celebrities

Dietitian shares the three 'danger' times you should avoid eating