By Alexandra Smith and Michael Evans

Not long after salacious details of Gladys Berejiklian’s personal life were sensationally aired at the corruption commission, the first bouquet of flowers arrived. Then another. And another.

At her Parliament House office and her electorate office in Willoughby. From friends, colleagues, and strangers. Dozens of bunches filled her offices.

As it emerged that Berejiklian had led a secret relationship of at least five years with the now disgraced former MP Daryl Maguire, the popular Premier received a wave of support that would buoy her to fight out the most tumultuous week of her life. 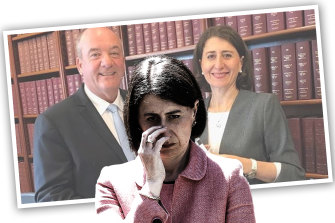 Gladys Berejiklian has been forced to defend her relationship with former Wagga Wagga MP Daryl Maguire, who is the subject of a corruption inquiry.

By Thursday night, she was sending bunches of flowers home with her staff. And her colleagues were left shell-shocked, grappling with the reality that Berejiklian may not survive the fallout.

While allegations of misusing his position as an MP for financial gain lay firmly at the door of Maguire, it is the Premier’s judgment that is now under heavy questioning.

How much did she know of his side hustles? And why didn’t she cut off contact with Maguire as far back as 2018 when he was forced to quit his 20-year parliamentary career amid corruption allegations?

After all, those allegations could well end with her former lover facing criminal charges.

And as covert surveillance of phone calls between the pair showed, Berejiklian also has not explained why she sought to avoid certain details of Maguire’s business plans.

In one call played by the Independent Commission Against Corruption, Berejiklian told Maguire: "I don’t need to know about that bit." 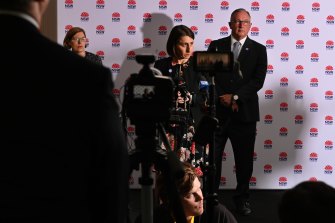 Berejiklian, facing the media on Friday, argued she had "stuffed up" in her private life and insisted she had dedicated her time in public office to the people of NSW.Credit:Nick Moir

There were also inconsistencies in the details of the relationship – in particular how long it had been going on.

Berejiklian says five years, beginning after the 2015 election, while acknowledging they had been colleagues for some 15 years. Maguire says it was an on-again, off-again relationship, throwing around dates from 2015 to 2016 during his evidence.

Yet the corruption commission revealed a text message showing Maguire using an Armenian term of endearment "hawkiss" for Berejiklian in 2014. "Hawkiss good news. One of my contacts sold a motel for 5.8 million. I had put her in contact so I should make 5k," Maguire’s message said.

And late on Friday ICAC released a transcript of a private hearing on Thursday in which Maguire said the relationship may have begun as early as 2013.

Berejiklian has repeatedly pointed out that she called for the-then parliamentary secretary’s resignation from the Liberal Party on the day he was exposed by ICAC in mid-2018 for attempting to broker property deals with Chinese developers. But the opposition has demanded to know why it was another week for Maguire to quit Parliament.

Ultimately, it took Maguire’s former boss Barry O’Farrell to convince him that his political career was over. Maguire’s once-safe Liberal seat went to a byelection, which the government lost to independent doctor Joe McGirr, making the government’s majority even more slim.

The Premier acknowledged she didn’t cut off contact with Maguire – whom she called her "numero uno" – until she was required to give evidence in a secret ICAC hearing in August and, she says, became aware of the nature of the allegations against him.

Asked in evidence this week if the relationship was ongoing, Maguire was sanguine: "Oh, not after the events of this I wouldn’t be, no."

Revelations also came of Berejiklian attending meetings, functions and dinners attended by secret business partners or associates of her partner.

The Herald revealed Berejiklian agreed to meet with two publicans with criminal histories at the behest of Maguire, despite her own racing and gaming ministers allegedly refusing.

Until Monday morning, Berejiklian was widely regarded as a hard working, competent Premier earning praise for her government’s response to the global COVID-19 pandemic.

A popular leader re-elected in her own right last year, Berejiklian had only weeks earlier effortlessly stared down a skirmish involving her junior Coalition partner.

Criticisms of projects such as the cost blow-out of the CBD light rail project did not stick to her, nor seemingly unpopular policy decisions surrounding the rebuilding of Sydney football stadiums.

Even the Ruby Princess debacle at the height of the pandemic did not cost her significant political capital.

But after spending six hours in the witness box at the commission, Berejiklian’s halo had slipped. Her self-confessed title of a goody two shoes who "has never and would never do anything wrong" is forever gone.

Over several days, details unveiled in the commission and reported in the media have left the Premier bristling and her backbench and ministers increasingly nervous.

Her closest allies spoke out in support even while reports of the likely contenders to replace her filled column inches.

She stared down the cameras, addressing "the people of this great state" that she had done nothing wrong and she worked tirelessly for their benefit.

But the Opposition was having none of it with Labor leader Jodi McKay labelling Berejiklian a "sounding board for corruption" in Parliament following details about Maguire’s attempts to help complete a property transaction near the site of the Western Sydney Airport. 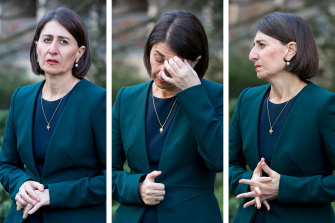 For NSW Premier Gladys Berejiklian, it has been the most tumultuous week of her life.Credit: Jessica Hromas

Maguire, the then member for Wagga Wagga, some 400 kilometres from the airport, was keenly involved in moving an intersection that was delaying the sale of farmland owned by Louise Raedler Waterhouse, daughter of famed late horse trainer Bill Waterhouse.

The deal was worth an eye-watering $300 million and Maguire stood to make a cut of $1.5 million. That was also the amount Maguire owed in a personal debt and one he had discussed with Berejiklian.

Clearing the decks would help set him up for life after Parliament. Maguire and Berejiklian had also discussed going public with their relationship on his planned retirement in 2019.

In a line of questioning that came closest to peeling back exactly how much Berejiklian knew, the commission heard calls between the couple, including a conversation about land at the airport at Badgerys Creek.

Counsel assisting probed what Maguire told Berejiklian. He pointed out the transcript of a call between the two discussing ‘’getting the Badgerys Creek stuff done".

"Do we take it from that you would explain to Ms Berejiklian in advance of this call of 5 September, 2017, what the Badgerys Creek stuff was?", Robertson said on Thursday.

Maguire answered: "I can’t recall doing it, but … you could assume that."

Three times Maguire told the commission he could not recall telling Berejiklian about Badgerys Creek, but conceded he kept her abreast of some of his business activities.

"I don’t know that I ever went into specifics. It was just broad discussion stuff."

McKay labelled Berejiklian’s protestations of her innocence as "delusional" during question time on Tuesday. One senior Liberal colleague who is close to Berejiklian concedes McKay may be close to the mark in her assessment.

"I think Gladys really believes she did nothing wrong, certainly nothing wrong legally, but I am not sure she can see the bigger picture yet," the Liberal says.

"None of us want her to go, no one, and we will stand by her. There is no way we are going to move on a Premier who is so popular. When she goes, it will be of her own doing."

Another senior colleague says Berejiklian is "completely loved by voters".

"For the first time in my career we have the public and politicians on one side and the media on the other," the colleague says.

"But what we don’t know is how long it stays like that and I admit it would only take one unhelpful detail to come out and everything would change."

The MP insists that about 80 per cent of correspondence to their electorate office this week discussing the scandal "is completely supportive of her".

"They absolutely love her out there," the MP says.

But not all Berejiklian’s colleagues are as confident of her future. One MP, who spoke on the condition of anonymity, warns that the Coalition "looks like Labor ahead of the 2011 election".

The MP agrees with colleagues that there will be no brutal leadership spill but the chances of Berejiklian leading the government to the next election is remote.

"I think she will be gone by Christmas," the MP says.

As Maguire continued his evidence on Friday, Berejiklian was digging in and maintaining she has done nothing wrong. She says she will lead the Coalition to the election in 2023.

"Hand on heart I have done nothing wrong," she again stressed.

"Mr Maguire was in Parliament for nearly 20 years, many of us trusted him, and many of us have been let down by him."

Asked what the threshold would be for her resignation, Berejiklian shot back: "When I’ve done something wrong."

'The Young and the Restless': How Christel Khalil Realized It Was Time to Return to the Show Full-Time?

SNL: Adele Sings 'Hello' and 'Someone Like You' During Bachelor Parody as She Competes for Love

Adele Jokes About Her Weight Loss, Says Her Album Is 'Not Finished' as She Hosts SNL for First Time
You may missed

Student lands placement at hospital where she was treated for cancer