She’s the glamorous TikTok and Instagram star with millions of online followers and the heart of global rap sensation and Australian export The Kid Laroi.

But next week when she joins the Australian and European legs of his global End of the world tour, 18-year-old student Katarina Demetriades will also be finding time to study for her high school exams. 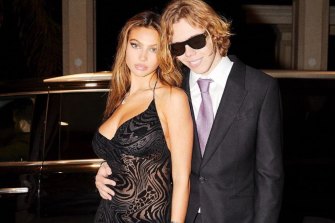 “I’ve been homeschooled my whole life, and I’m about to enter my final year of school, so I’m going to be doing my finals whilst we’re in Australia,” she told The Sun-Herald from her family home in Los Angeles.

“The whole family is going to be there. Anytime that I have travelled with him (Laroi), I’ve had a parent come with me, but Europe’s going to be my first time by myself, so I’m very excited,” she said.

The Kid Laroi, real name Charlton Howard, hails from Sydney’s Waterloo and attended Glebe’s prestigious Australian Performing Arts Grammar School on a scholarship. He began rapping at the age of 13, predominantly as an outlet to process his family struggles and the death of his uncle years earlier. 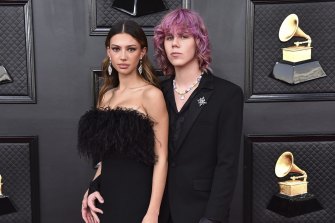 Since he broke through as a finalist of Triple J’s Unearthed High in 2018, Laroi is now one of the most streamed artists on the planet.

His 2020 single ‘WITHOUT YOU’ went platinum in the US and three-times platinum in Australia and last year he made history by becoming the youngest artist to top the Australian album chart with his mixtape F–k Love (Savage) and recently opened the MTV VMAs with his friend and collaborator Justin Bieber. 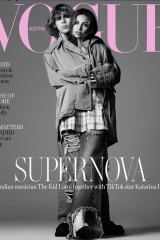 The couple recently featured on the cover of Vogue Australia where they discussed marriage in the future.Credit:Instagram

“It’s been really crazy to watch him [Laroi] grow, I remember we used to be able to, like, take Ubers everywhere and go to restaurants. We don’t get to do that so much these days,” she said.

The couple met through friends but were kept apart for months once the COVID-19 pandemic hit and the US went into lockdown.

“When we first started talking I literally had no clue who he was. He had one song out, then the pandemic hit, and I wasn’t allowed to leave the house for three months” she recalls.

“So we Facetimed for hours every day and became great friends before we started dating”.

Demetriades is a star in her own right, boasting a 9.5 million likes on TikTok and 1.2 million followers on Instagram under the name of Katarina Deme, mostly satire videos, selfies, and snaps alongside Laroi.

“I don’t know if I would necessarily say that I’m famous. If anything, I would say that I’m somewhat known,” she says of her high-profile relationship and social media stardom. 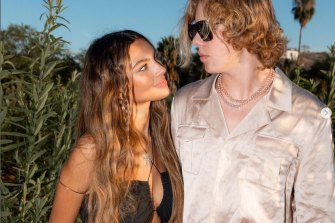 Katarina has millions of social media followers of her own. Credit:Instagram

“I think that I just got extremely blessed that I was able to gain some attention online. I don’t post as much as I should, it’s always a second thought to my school work.”

Despite the fame that comes along with her boyfriend’s job, she doesn’t let his celebrity status get to her head or encroach on their relationship.

“It’s one of those things that is bound to happen in any relationship but, for us, it’s on a bigger scale,” she explains. “We love each other. .. so it’s like whatever, who cares?”

Her megastar boyfriend, also 18, isn’t shy about proclaiming his love for Demetriades either, telling Vogue Australia he hoped they would get married one day when the pair featured on the cover of the glossy. 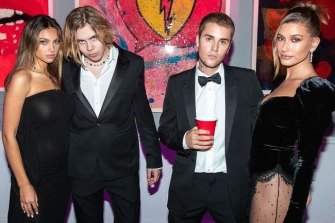 Hollywood power couples: The Kid Laroi and Katarina hanging out with Justin and Hailey Bieber.Justin and Laroi are good friends after d collaborated last year on the No. 1 hit Stay. Credit:Instagram

“I’m probably one of the luckiest people on earth because even when something looks like it’s not going to work out, it somehow does, just look at my girlfriend. I’m so lucky!” he told to publication, adding. “We’re just taking life how it goes. But, sure, I would love to get married to Kat one day.”

“Meeting Hailey Bieber was huge. She’s like the sweetest soul in the world. I looked up to her growing up, and she is so beautiful inside and out, so that was a wow moment for me when she even knew my name.”