“I have no hope towards the government. But I still have hope in the people.”

Joshua Wong, one of the most prominent leaders of Hong Kong’s increasingly bold democracy movement, also has hope in the after-effects of a certain virus. 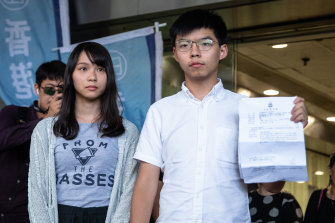 Joshua Wong with fellow Demosisto member Agnes Chow, left, after they were granted bail in August.Credit:Bloomberg

He is also fielding calls from around the world to publicise a new book: Unfree Speech, the threat to global democracy and why we must act, now.

You can hear fatigue in his voice – and determination. His answers are concise and filed to a political point.

I pinch myself to recall he is only 23 years old. He is to Hong Kong democracy what Greta Thunberg is to climate activism: a young voice seeking to inspire the young. His impatience with me is his impatience with failed generations.

“The future belongs to the next generation, it should not be dominated by the upper class elite serving the interests of authoritarian rule,” he says. “That’s the reason for me to write this book, for the young generation around the world to be more actively engaged in politics, to be the change we want to see. I want to inspire Millennials, even generations younger than me, [so] they can be inspired to take action and engage in civil society development.”

As he puts it in the book, grassroots movements “are increasingly led by Millennials and Generation Z-ers, as they are often the ones most impacted by older generations’ inaction and acquiescence”.

The book’s forewords see artist and filmmaker Ai Weiwei hail Wong as “a new generation of rebel” and the last British governor of Hong Kong, Chris Patten, warn “you cannot defeat an idea by locking up its proponents”.

It is a three-parter that morphs from anecdote to thesis: first Wong tells his own story, the remarkable journey of a dyslexic boy with a drive to question authority who was dubbed “dokuo” – a man with no girlfriends – at school and who delights in a solitary life playing video games.

Wong still relaxes by playing PS4 with his mates. But the dominant theme of his teenage years was rebellion: at 13 he started going to anti-government demonstrations, then he and a friend launched Scholarism, a pro-democracy movement that rapidly attracted thousands of followers. He was 14.

Then came the “umbrella revolution” in 2017. By now Wong was one of the Hong Kong democracy movement’s leading voices. At a protest he called on demonstrators to occupy Civic Square and was arrested for the first time.

That time was a “paradigm shift”, Wong writes, “forever altering the relationship between state and citizens, the oppressor and the oppressed”.

“We did the best we could under the circumstances.”

The middle of the book holds his letters from prison, where every day he was required to shout at the top of his lungs: “Good morning, Sir! I, Joshua Wong, prison number 4030XX, have been convicted of unlawful assembly. Thank you, SIR!”

By now he was Time magazine’s “Face of protest”, one of Fortune’s “50 greatest leaders”, a New York Times op-ed writer.

But he was also a young prisoner in a juvenile jail, missing his mum’s hand-brewed milk tea and the chicken hotpot from the corner shop, sleeping on a wooden plank with no mattress, folding laundry and taking part in the endless marches staged for VIP visitors, scrubbing toilets and watching TV – and reading voraciously (on the day of his release he reached the last page of Malala Yousafzai’s memoir).

The last part of the book is Wong’s political call to arms – around the world.

“If multinationals, international governments and indeed ordinary citizens do not start paying attention to Hong Kong and treating our story as an early warning signal, it won’t be long before everyone else feels the same invasion of civil liberties that Hong Kongers have endured and resisted every day on our streets for the past two decades,” he writes. 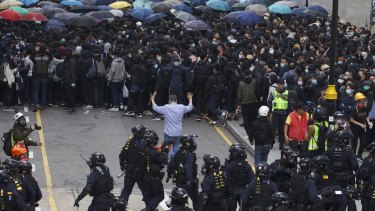 As new protests and harsher crackdowns flared on Hong Kong’s streets, Wong places the blame firmly at the door of the government for the escalation of violence on both sides.

Wong’s book gets grim towards the end. In Hong Kong, he writes, local bookstores sell Hong Kongers’ Guide to Opening a Cafe in Taiwan and Emigration to Europe for Dummies.

Around the dinner table and at the office drinks machine people ask: "How does the Australian [immigration] points system work? Will my score go up if I purchase a property?"

Meanwhile he charts China’s “seemingly unstoppable rise to economic and political dominance”, its arm reaching beyond its soil to cow corporations and governments. 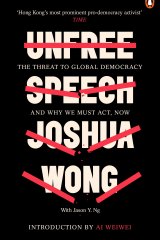 “Hong Kong is the first line of defence to stop or at least slow down the dangerous rise of a totalitarian superpower,” he writes. “Like the canary in the coal mine or the early warning system on a tsunami-prone coastline, we are sending out a distress signal to the rest of the world so that countermeasures can be taken before it is too late.”

He tells me he has not given up hope. He has “no plan” to seek political asylum, despite the prospect of more jail, the growing number of his friends facing a decade in jail and stories of live bullets being fired at protesters.

He calls on the Australian government to “recognise the erosion of universal values and stand with Hong Kong”.

And he calls on young people everywhere to mobilise, get politically aware and informed and march with him in person or in spirit.

“The movement is still growing,” he says. “I have already been jailed, and I still continue the fight. As Hong Kongers I hope we can determine our own destiny.”