Labor has chosen a former diplomat, political staffer and adviser in the UK’s “Nudge Unit” Zhi Soon to take on Liberal David Coleman in the NSW seat of Banks at the next federal election.

Opposition leader Anthony Albanese will introduce Mr Soon as the candidate on Friday at a media event at a childcare centre, highlighting his work as an adviser on education at several institutions. 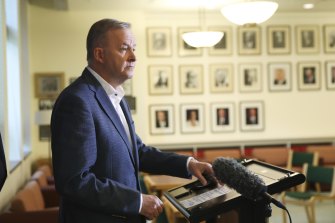 This includes time at the Australian Institute for Teaching and School Leadership, the UK office of the international Behavioural Insights Office, informally known as the ‘Nudge Unit’, the NSW government’s Behavioural Insights Unit and the NSW Board of Studies. He also worked at the Department of Foreign Affairs and Trade, including a posting in Afghanistan, and in the prime ministerial office of Kevin Rudd.

“Zhi will be a passionate advocate for this electorate, committed to ensuring more families across Banks and across this country are able to access good quality education and health care,” he said in a statement.

He highlighted Mr Soon’s local connections, living with his partner Bridget in Padstow, with his parents and sister also in nearby suburbs.

“Like many others in his community, Zhi’s family came to Australia in search of a better life and new opportunities for their children, as well as enthusiasm to contribute to their new country,” Mr Albanese said.

Mr Coleman, the assistant minister for mental health and suicide prevention, has been the Member for Banks since 2013.

He holds the seat with a 6.26-point margin, having won a swing towards him of more than four points at the 2019 election.

He previously held the immigration portfolio but stood aside from it for more than 12 months for personal reasons, taking on the new assistant minister role in December 2020.

50 gift ideas for men to suit every taste and budget

I’m bisexual – stop asking me to ‘pick a side’

Adidas’ Adistar Sneaker Is In It For the Long Runs