The shockwaves from Four Corners’ Killing Field report will be felt for some time.

What we saw on our televisions last week was video of an Australian soldier shooting an unarmed Afghan in front of other soldiers, including a superior and, unusually, a camera. The soldier was not under threat and there was no apparent justification. That was just one of a number of incidents. 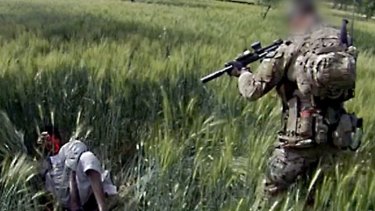 A still from a video shows an Australian soldier allegedly about to shoot a subdued Afghan man in 2012.Credit:ABC/Four Corners

However, the rise of the Commandos in competition with SASR is another factor. There was toxic, often counterproductive rivalry between the two parts of the Australian Special Operations Task Groups. One officer at the centre of this darkening heart said the SASR started chasing kills. Tactical progress in Afghanistan came to be measured in blood.

This attitude could be incompatible with strategic objectives, but that fact was overlooked. At an influential stage in Australia's longest war, a small cohort of commanders turned away from traditional SASR practices of silent and subtle achievement to let loose the dogs, "the true special warriors".

Meanwhile, Australian command and control mechanisms faltered. "Big Army", as it is known, had less influence in the tasking and oversight of Special Forces. These men had beards, acted like brethren and stayed in an exclusive compound, Camp Russell. They began to tell themselves they were carrying the weight of the war. Their alienation from the command structure of the conventional forces grew and they increasingly aligned themselves with the American special forces.

As best we can tell, alleged misconduct directly involves around 10 to 15 soldiers. That is a tiny percentage of deployed personnel.

There is some argument that some bad practices may have been imported. One senior officer told us summary executions from Northern Ireland and Iraq infected elements of British Special Forces and infiltrated SASR through exchange programs.

Australian operators also joined US Special Forces on exchange. Some hardened operators came to see executing detainees as a better option than allowing them back in an asymmetrical battlespace to inflict more mayhem.

Some of the killings by Australians in Afghanistan also bear the stain of revenge. Given the loss of comrades, it is an understandable emotion. But highly trained professional special operators are supposed to have ingrained battlefield composure.

Another question raised by the Four Corners report is how were rules of engagement and an extensive inquiry process defeated? The helmet camera vision shows an Afghan man, Dad Mohammad, shot at close range. After local Afghans complained, an ADF inquiry officer team interviewed witnesses in Perth and Afghanistan. They were told the man ignored calls to stop, that he was regarded as a direct threat and was engaged in self-defence from 15 to 20 metres.

Rules of engagement gave latitude to the soldiers. A suspected insurgent did not need to carry a weapon to be targeted. Unarmed Afghans deemed to be "spotters" or "squirters" – people moving quickly away from an object of interest – were lawfully engaged. This man was alleged to be carrying a radio and "tactically manoeuvring". If this was true, he might have been in a position to reach a weapons cache or call in a strike on vulnerable helicopters.

Soldiers told us if they returned a suspected insurgent battered and bruised, there would be endless inquiries, but if they left him dead in the field, there may be little consequence.

The inquiry process was resented. As the Australian Commanding Officer at the time commented, "People who have not been in combat have no idea. It's just absolute chaos yet ADFIS (The Australian Defence Force Investigative Service) treat war as if it is a clinical event."

The investigators, without a Special Forces pedigree, could be scorned. They were told it was unsafe to travel to the location of the incident. While they could have been more vigilant and curious about the planting of evidence such as radios (endemic at the time), it was not easy. The soldiers weren’t the only ones telling lies; the Afghans commonly overstated allegations, sometimes outlandishly.

Despite the Four Corners revelations, after the hundreds of interviews we have conducted, we hold to the view the majority in Special Forces are professional soldiers and decent Australians.

The Inspector-General has already reported it is investigating 55 incidents from 12 years of conflict. As best we can tell, alleged misconduct directly involves around 10 to 15 soldiers. That is a tiny percentage of deployed personnel.

So, what happened to the "little voice"? Why didn’t honourable soldiers, in a presumed majority, speak up?

The answer is they did. Repeatedly. They just weren’t listened to. And soon, the weight of indifference in mid-level command meant they gave up.

But thanks for trying. They are listening now.

Jesse Tyler Ferguson and Justin Mikita Are Expecting Baby No. 2