Greens Senator Lidia Thorpe has cleared the way for a split with her colleagues on the Indigenous Voice to parliament in a formal deal in the party room on Wednesday that gives her free rein to vote against the proposal while others give it their support.

The agreement is almost certain to lead to a divided Greens position on the crucial question in a referendum at the end of this year unless Thorpe gains an assurance from the federal government that Indigenous sovereignty will be guaranteed as part of the Voice.

The outcome breaks with the party’s usual demand for total discipline when voting on major policy but was agreed after an online meeting on Wednesday afternoon that ran for several hours to consider Thorpe’s criticism of the Voice and her call for a treaty with First Australians. 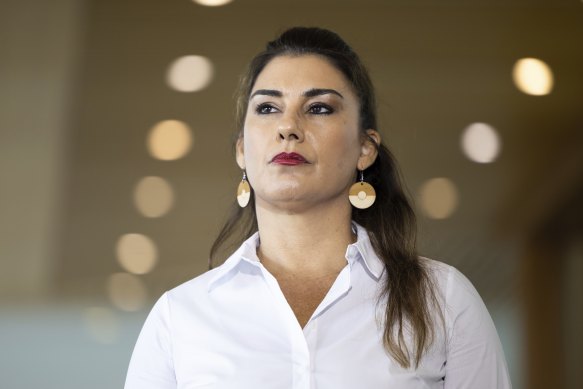 Lidia Thorpe will campaign against the Voice while the rest of the Greens will likely support it. Credit:Alex Ellinghausen

The agreement was brokered after months of dispute over the party’s approach when Thorpe rubbished the Voice as a “wasted exercise” while Greens leader Adam Bandt said he wanted to support the idea as long as he was satisfied with good faith talks with Labor.

The formal agreement is that Thorpe can vote no or abstain on the Voice if and when the rest of the party room chooses to support the proposal after the negotiations with the government.

“It would take a lot for me to change my personal and long held view that I don’t think First Nations justice will come from being written into the coloniser’s Constitution,” Thorpe said in a statement after the meeting.

“Labor has asserted through our negotiations that sovereignty isn’t impacted. It’s not enough. It needs to be explicit.”

A final position by the rest of the party room is not expected until the end of negotiations with the government, with the next stage coming when the Greens meet face to face as federal parliament resumes on February 6.

“The Greens want the best possible outcome and we believe we have a responsibility to continue to apply constructive scrutiny to the government’s plan,” said acting leader Mehreen Faruqi.

Bandt took part in the meeting, but he is still on leave and has not put out a statement.

The party said in a statement that the Greens’ constitution gives MPs and senators the right to vote differently to their colleagues and that party rules require them to inform the party room at the earliest opportunity if they choose to do so.

The outcome clears a potential hurdle on the path to the public vote because the parliament must pass a bill this year to authorise the referendum and Labor may need support from the Greens in the Senate in the event the Coalition does not support it.

But it formalises a rare split that is likely to put Thorpe at odds with her federal colleagues on a totemic policy for Indigenous Australians when she is the Greens spokesperson on First Nations issues.

The division comes after the Resolve Political Monitor this week revealed a fall in support for the Voice over the past four months, with 60 per cent of voters in favour of the proposal when asked about it in a referendum-style question with only “yes” or “no” options. Support was 64 per cent in a similar survey last September.

The survey found that Greens voters were strongly in favour of the Voice, with 87 per cent of them saying they would vote “yes” in the referendum-style question compared to 72 per cent of Labor voters and 38 per cent of Coalition voters.

Prime Minister Anthony Albanese challenged the Coalition and the Greens to back the Voice and unify the country.

“The Voice is about two things. It’s about recognition – that is, giving people respect in our nation’s birth certificate. And it’s about consultation – it’s about giving people a right to have a say,” he told Sky News.

In a challenge to Opposition Leader Peter Dutton and Bandt to back the Voice, the prime minister said party leaders had an opportunity to bring the country together on reconciliation.

“I’m not the only person in a position of leadership in this country – the leaders of other major parties and indeed minor parties, including the Greens political party, this is a moment for them as well,” he said.

“Will they seize the opportunity to unite the nation and to take it forward as one?”