A new koala protection policy to be launched on Monday by federal Environment Minister Sussan Ley may put the Morrison government on a collision course with state leaders and project developers.

The centrepiece of Ms Ley’s policy is a population census to identify key habitat areas in koalas' range across Queensland, NSW, Victoria and South Australia. 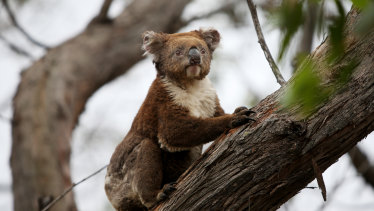 “This is a line in the sand, we’re ruling a line under where we are on koalas right now,” Ms Ley said.

“We are doing this because it needs to happen. I have been so frustrated that no-one could give me the data I needed … it’s just not there – only in patches.

“I don't think there's been enough national leadership on this iconic species before.”

Annual reporting on populations and conservation strategies will be mandatory at national environment ministerial meetings. A range of survey techniques will be employed like scat monitoring, drone and acoustic surveys, detector dogs as well as citizen science.

The “baseline data” from Ms Ley’s census could act as a backstop against state governments if there are moves to weaken habitat protection – which could clash with state governments planning regimes that have primary control of approvals for urban development and agricultural land clearing.

An example is the push by the NSW Nationals to wind back their government’s new laws that expanded the definition of koala habitat, following advice from ecologists who conducted a scientific assessment.

NSW Planning Minister Rob Stokes expanded the definition of tree species listed as koala habitat from 10 to 123 across the state but, following lobbying from developers and farmers, the Nationals stepped in and the law was rescinded.

Data from a national census could, potentially, be used by a federal minister to assess state-approved development under Commonwealth protections for listed threatened species like koalas – and potentially prevent the "death by a thousand cuts” scenario which is often raised by ecologists.

The phrase is often used to criticise clearing approvals which were judged to have a minimal impact on a species' population across its range – but the greater impact within a particular region were not taken into account.

However, it remains to be seen how the federal government utilises the koala census.

Chairwoman of the independent Threatened Species Scientific Committee, Emeritus Professor Helene Marsh, said there are "lots of places where koalas occur where we know very, very little" about the species and the census was a “very significant move by the minister”.

“It will enable us to have the empirical data on what are the most important populations in the region, and will set a firm baseline for trends,” Professor Marsh said. “It will put the whole koala strategy at national level on a completely different footing than it's been in the past.”

Professor Marsh said it was impossible to “lock up the whole range of koala habitat” across the eastern states, but she said the “problem is soluble and that there will have to be some trade-offs, but the threats will be different in different places”.

Ms Ley acknowledged there would be “nay sayers” who viewed the policy as window dressing, or even downgrade protections for areas found to be low priority.

She disagreed, arguing her census was “not about going backwards, only forwards” and said the same protections for koalas which are listed under Commonwealth law would still apply.

Land clearing is the biggest threat to the survival of koalas in the wild, scientists say, but very few project applications are assessed despite the requirements under national laws.

An analysis of government development approval registers by the World Wildlife Fund (WWF) found between 2010 and 2018 43,113 hectares of known koala habitat was cleared, excluding logging operations.

Kourtney Kardashian, 41, poses in nude bikini after she 'rolls her eyes' at Scott Disick romance with Amelia Hamlin, 19