Save articles for later

Add articles to your saved list and come back to them any time.

Professor Mark McMillan, who hopes to serve as the City of Melbourne's first Indigenous councillor, says his "big desire" is to see Aboriginal participation rather than tokenism in Australian politics.

The Wiradjuri man and public law academic is running as the third of nine candidates on lord mayor Sally Capp's ticket for Melbourne Town Hall. Team Capp will need 30 per cent of the vote for him to win a place on the council. 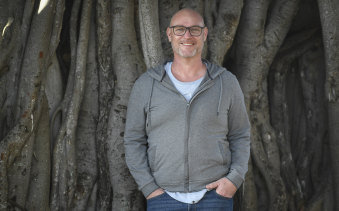 If elected, Professor Mark McMillan would be the City of Melbourne’s first Aboriginal councillor.Credit:Ian Hitchcock

"I was interested when Sally approached me to be on her ticket, because it wasn't just, 'I want diversity' … it's not about white virtue signalling," he said.

"She actually wants people's diverse lived experiences to be part of how we govern over the next four years. None of us feel like we're token."

In 2016, Brooke Wandin was elected the City of Melbourne's first Indigenous councillor, but she was found to be ineligible because she didn’t live in the municipality and never served.

If Professor McMillan, a gay man who lives in Seddon with his partner and son, achieves his goal of serving on the council, it will follow a long list of personal and family firsts.

Although he lives in Seddon, which is in the City of Maribyrnong, as a director of a company in Carlton that tackles climate change issues, he is eligible to run for the City of Melbourne.

Professor McMillan was born in 1969 in Trangie, a small town west of Dubbo in NSW, and his grandmother was one of 16 siblings.

"Nan made us go to school because she wasn't allowed to," he said.

"She understood as an Aboriginal woman that education … has the capacity to transform lives."

Between them, her grandchildren have 26 bachelor's degrees, six master's degrees and two doctorates.

He used his time at the University of Melbourne to research Indigenous human rights.

Professor McMillan, who sued columnist Andrew Bolt over racial discrimination in 2009, served as a director of the former National Congress of Australia’s First Peoples and is a board member of the Trangie Local Aboriginal Land Council.

Before this, he served as an appellate judge in the Yaqui Court of Appeals, a Native American tribal court in Tucson, Arizona.

“I can’t disassociate … what I know about public law and Indigenous nation building and not bring that into the governing [of Melbourne City Council]," he said.

Professor McMillan has been in Townsville caring for his sick mother during the campaign period.

He has taken leave from RMIT amid an employment dispute.

"I can't make any further comments … other than I can confirm that there is a dispute and we're genuinely close to resolution," he said.

"We hope to resolve it in an ongoing manner that reflects the genuine goodwill to both [parties]."

An RMIT spokeswoman said the university did not provide comment on matters relating to individual employees.

“And now, hopefully, rather than a white guy who wants that engagement, we'll have an Aboriginal man who is steeped in understanding of social law,” he said.

Cr Capp said she asked Professor McMillan to run on her ticket because of his experience running major campaigns that created social and legal change, something she believed the council could improve on.

"Mark has shown that he’s somebody [who] can really rally people," she said.

"I'm really excited about what we can achieve as a city and as a community with that sort of leadership."

Cr Capp said it was also important that the city realise its ambition to put its Aboriginal heritage at its centre.

Professor McMillan said the appointments, and his candidacy, were exciting milestones for Aboriginal leadership.

Get our Morning & Evening Edition newsletters

The most important news, analysis and insights delivered to your inbox at the start and end of each day. Sign up here.

Bella Hadid Just Got Two New Arabic Tattoos, Which Translate to “I Love You” and “My Love”

Patti is sick of Chris moping around about being unemployed