As Australia and other countries battle more intense and frequent fires in a changing climate, trying to comprehend their scale and ferocity, and capture their abnormality in a historical context, has seen the rise of terms such as “megafire”.

Despite being around as a phrase since 2005, there has been little consensus on what exactly a megafire is. 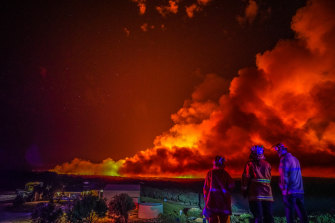 Firefighters watch on at blaze near Margaret River in Western Australia in December.Credit:DFES

This led a team of Australian researchers to collaborate with fire scientists from around the globe to review the use of the term and suggest it should refer to blazes that burn through more than 10,000 hectares of land.

This would see gigafire used when more than 100,000 hectares is burned by a single fire, or when several fires join up; and terafire for 1 million hectares.

The Black Summer fires of 2019-20 would have been described as a series of gigafires and a number of megafires as well.

The two phrases are based on Greek roots with giga meaning giant and tera translating to monster.

Animal ecologist and CSU associate Professor Dale Nimmo, who has previously advised the federal government on bushfire recovery for wildlife, was the senior author and said not having a consensus on what a megafire was could create issues.

“If scientists are talking to one another and have a different meaning in mind for the one word it can become problematic and lead to miscommunication with the media and general public,” he said.

“When megafire was coined, it was coined in North America, to describe fire behaviour and activity that was abnormal and that these fires were outstripping the capacity for firefighters to control them.

“As times have gone on, people have tried to use the concept in a more pragmatic way by looking in trends at megafires over time. People have leaned more into an idea it is about the size of the fire.”

Associate Professor Nimmo said the terms could be used to complement existing terminology rather than overlap what already existed given the terminology used in the emergency space was already broad.

“A megafire can be a wildfire disaster when it burns in close proximity to human settlements, and it can be an extreme wildfire event when its behaviour becomes extreme,” he said.

“But it can also sit in isolation from those.

In Australia there is a wide-ranging set of terminology used to describe different aspects of the country’s bushfire season.

The fire danger rating system, which gives residents an idea of just how dangerous a blaze could be if it started in the current conditions, once traversed low-moderate, high, very high, severe and extreme.

In 2009 the rating system added ‘catastrophic’, which was activated for the first time for the Sydney region during Black Summer.

Different states also have terminology for the impact of fires and other incidents on emergency authorities. In Western Australia there are three levels when it comes to strain on resources with the highest meaning numerous state, federal or even international agencies are needed.

This past summer Western Australia had four level-three fires burning at one time, two of which could be considered megafires under the newly proposed definition.

In the ashes of fires, authorities in Australia will use different terms based on the outcome, whether it be social or ecological disasters after a blaze.

Associate Professor Nimmo said it was hard not to speak in language which emphasised the difficult challenges Australia faced with fire but communication around it need to look to science rather than sensationalism.

“In Australia, fire is an important part of the landscape,” associate Professor Nimmo said.

“It’s not always going to result in negative outcomes.

“We have to overcome our fear of fire in a way to help manage it and so we can avoid fires like the 2019-20 fire season which was so unusual.

“Once you can arrive at a standard definition we can look at trends of what people are describing as megafire. If it’s above 10,000 hectares we can ask, how unusual is megafire in south-eastern or south-western Australia?”

The paper is published in Global Ecology and Biogeography.

How N.E.R.D.'s Debut Brought the Dawn of a Boundless Era
You may missed