Sigmund Jorgensen, who played a significant role in helping establish Montsalvat as we know it, has died, aged 79.

His father Justus and his partner, Lily Smith, established the beautiful artist's colony in Eltham in 1934, naming it after the home of the legendary Holy Grail.

Originally built for Justus and his family, Montsalvat attracted many artists, artisans and intellectuals over the years, including Clifton Pugh, Betty Roland, Leonard French, Helen Lempriere and Albert Tucker. 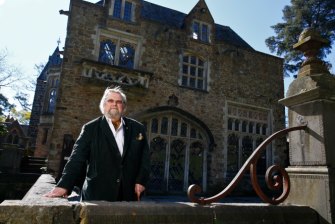 Monsalvat is home to over a dozen buildings, houses and the stunning three-storey Great Hall built out of local stone, recycled timbers and rammed earth and set among picturesque gardens on 12 acres of land.

It was a welcoming space for artists in a conservative era and renowned for its open ideas. Sigmund and his brother, Sebastian, are the children of Justus and colony member Helen Skipper. Lily James and Jorgensen senior remained married and reportedly dined together with Skipper each night, much to the scandal of the less liberal-minded.

What made Montsalvat unique was "magic and madness", Sigmund once said. He believed it had had a particular resonance with the community because it was accessible and friendly.

Sigmund took over the running of Montsalvat in 1969, when it had fallen into disrepair and was in financial trouble. As general manager, he was pivotal in rebuilding it and oversaw the completion of many of its buildings and initiated others, including the restaurant.

He continued to work for Montsalvat for 45 years and wrote an acclaimed book about growing up there.  In 2014, he claimed he was dismissed from his role by email, a claim countered by the then board, who said his role was discontinued.

He ran for State Parliament and went on to become a local councillor and was the mayor of the Nillumbik Shire for a time. He was awarded an OAM in 2013 for his services to arts and culture.

Dr Jacqueline Ogeil, executive director of Montsalvat, said she and Sigmund had had constant lunches and coffees and discussions about art and music.

Sigmund was a big supporter of the Geminiani Chamber Orchestra, which trained many of the musicians now in Melbourne for the Australian World Orchestra concert.

Popular as a wedding venue, Montsalvat has been used as the setting for many movies, including this year's Judy and Punch, starring Mia Wasikowska. Its Gothic and tudor style buildings, set in the rolling hills of Eltham, make it an ideal backdrop. It continues to host exhibitions, workshops, artists-in-residence and festivals. and is open to the public.

Beyond the Montsalvat connection, Sigmund also ran the restaurant Clichy – with chef Iain Hewitson – was a food critic for the Melbourne Times and created the Montsalvat Jazz Festival. He is survived by his partner Sue.

Montsalvat was closed on Monday to honour Jorgensen and will host a memorial service for him at 2pm on Friday, August 9.

Paris Hilton Explained Her Voice and 'The Simple Life' Persona in 2011: 'It's a Character I Developed'
Celebrities

Paris Hilton Explained Her Voice and 'The Simple Life' Persona in 2011: 'It's a Character I Developed'