Prime Minister Scott Morrison will on Sunday make his final set-piece pitch to Australian voters with a superannuation policy to encourage Australians to downsize their homes in a last-ditch attempt to halt his campaign’s stumbling momentum.

Morrison will formally launch his party’s campaign at the Brisbane Convention Centre before Liberal luminaries including former prime minister John Howard as he attempts to shore up key marginal seats and convince undecided voters to give him another term in office. 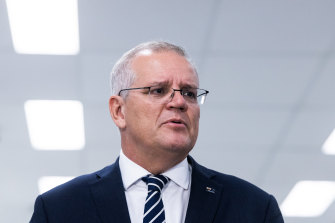 In a sign of his campaign’s faltering momentum, Morrison spent Saturday on the back foot over revelations in The Sydney Morning Herald and The Age that senior members of the Biden administration insisted that it would only consider pursuing the landmark AUKUS deal if it had solid support from Labor.

There was fury in government ranks at the publication of the story, which sent the Coalition further into damage control and resulted in the party pulling plans to provide this masthead with details of Sunday’s centrepiece announcement ahead of time.

The story prompted Opposition Leader Anthony Albanese to accuse Morrison of breaking trust with the Biden administration by not briefing Labor months before the announcement of the AUKUS agreement with the United States and Britain.

Morrison will on Sunday announce a policy to help Australians downsize their homes through superannuation contributions, according to multiple Coalition sources.

On Sunday, the Coalition will announce an expansion of this program to people aged 55 and over, up to the personal transfer cap of $1.6 million.

The policy applies to the principal place of residence for a single person or a couple who must downsize after selling their home.

Meanwhile, Albanese will on Sunday announce a $1 billion advanced manufacturing package and address a party rally in Brisbane.

The rally will have a heavy Queensland focus in a final bid to claim crucial swing seats in the sunshine state. However, strategists from both sides believe it’s possible no electorates will change hands in Queensland.

Before Sunday’s campaign launch, four senior Liberals MPs and party strategists, who asked not to be named so they could discuss the government’s electoral prospects, said it was increasingly difficult to see how the government could win 76 seats and form majority government.

The quartet all said victory was still possible with a week to go in the campaign but suggested the Coalition could have to look to one or two crossbenchers to form government.

Internally, there is a “briefing war” taking place within the Coalition, with people in Morrison’s Centre Right faction presenting a more upbeat picture of the government’s prospects – including that outer suburban seats such as McEwen in Victoria and Greenway in NSW are still a chance of flipping to the Liberals.

But MPs from the moderate and conservative factions are more downbeat and suggest that seats including Reid, Bennelong, Chisholm and Boothby will fall to Labor, a view that aligns with that of ALP strategists, who also believe North Sydney, Swan and Pearce in WA, and the Queensland seat of Brisbane are line ball.

All the Liberals who spoke to The Sun-Herald and The Sunday Age agreed that Parramatta, in NSW, and Corangamite, in Victoria, were still in play and could be won by the government.

One Liberal MP, a conservative, said Tasmania and Queensland still looked OK for the government, with a good chance no seats would change hands, but “NSW and WA are not super confident”.

Asked about the Prime Minister’s “bulldozer” strategy, the MP said “there is no question people are over Scott” but the government’s handling of the economy was still a positive.
A second conservative MP said, “We are OK in the outer suburbs, the worry is about the teals [independent candidates].”

“We are not there yet with Corangamite but we are OK, McEwen is in the ‘really good day’ category. But NSW is the worry”.

“Bulldozer was a signal to the undecided voters who are grumpy with the PM but not sold on Albo. Does it override the crankiness? It’s not clear.”

A Liberal moderate said the contest was tighter than national polls suggested and that support for Treasurer Josh Frydenberg was strengthening in Kooyong.

“We could lose but save Josh.”

The Coalition’s mixed messages follow 48 hours of Morrison attempting to convince voters that he would change from his “bulldozer” approach during the pandemic if he won the election.

When asked by a reporter in Melbourne why now was the time to change, Morrison said, “I’ve been listening to people.”

Morrison said the pandemic meant he and the government needed to be “in the gear of pushing through”.

“And as a government, I’m looking forward to changing the gears of our government to secure those opportunities that are ahead of us. And that means being able to engage more with local communities.”

Meanwhile, Labor’s promise on Sunday of a new $1 billion advanced manufacturing fund will give businesses access to capital to diversify operations and take advantage of new research and development opportunities.

It will come out of Labor’s $15 billion National Reconstruction Fund.

“Labor believes Australia can become a country that makes things again with national reconstruction focused on advanced manufacturing and creating local job opportunities for the next generation,” Albanese said.

“The Advanced Manufacturing Fund is part of Labor’s commitment to ensuring we build on our national strengths and diversify Australia’s industrial base in key areas.”

Cut through the noise of the federal election campaign with news, views and expert analysis from Jacqueline Maley. Sign up to our Australia Votes 2022 newsletter here.

Drake's Custom Lightning Arc'teryx Jacket Is a Sight to Behold

Drake's Custom Lightning Arc'teryx Jacket Is a Sight to Behold