Good news out of Israel is rare these days but Breaking Bread delivers with a story that had its origins in MasterChef, of all places. It’s about the A-Sham Arabic Food Festival, a fusion of Arab and Israeli culinary traditions set up by Dr Nof Atamna-Ismaeel, the first Arab to win Israel’s MasterChef. 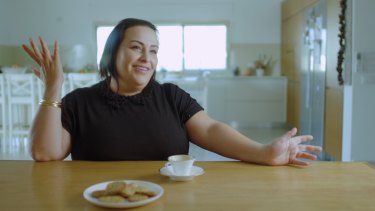 A natural optimist on a mission to point up the many similarities between Palestinian and Israeli customs, tastes and cultures, Dr Atamna-Ismaeel admits that her dual status means that she stands between the country’s two main ethnic groups, not quite belonging to either. But this, she insists, is a good thing, enabling her to sample the best of both worlds. 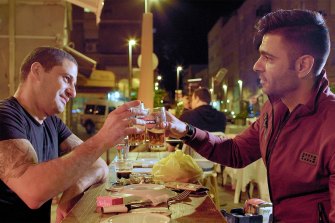 A scene from Breaking Bread.

It’s a view that we in the West don’t often hear but Breaking Bread makes it clear that she’s not alone. The festival is organised around a simple but ingenious principle: it pairs Israeli chefs with their Arab counterparts and takes them to the coastal city of Haifa, where the festival is held, to show what they can do together. The result is a gourmet guide to the disparate historical shifts that have gone into the making of the country’s multi-faceted population.

The film’s writer-director, Beth Elise Hawk, who’s based in Los Angeles, lingers in salivating slow-motion over the photogenic qualities of the dishes on show as the festival’s team of chefs affably compare notes about the 101 things that can be done with hummus, yoghurt, eggplant and sumac but the food is fascinating mainly as an index to their family backgrounds.

Shlomi Meir, the grandson of a Holocaust survivor, still runs the restaurant that his grandfather established 60 years ago, cleaving to the same Eastern European Ashkenazi stye of cooking. But he’s happy to learn from Ali Khattib, his festival team-mate, whose restaurant on the Israel-Lebanon border serves food made from Syrian recipes handed down from generation to generation. And Ilan Ferron, who was born into a Moroccan family, happily collaborates with Salah Cordi, a Jew from Jaffa who introduces him to the seafood dishes that he’s been eating since childhood.

Inevitably, politics comes into the story. None of the chefs we meet come from the West Bank and it goes without saying that there can be none from the Gaza Strip, although one chef makes a wistful reference to a dessert served at Gaza weddings. After all, she says, we should be reminded that Gaza is more than a war zone – that its people have homes, cook, eat and do their best to carry on as normally as they can, no matter how desperate their circumstances.

Everything We Know About the Next ‘Transformers’ Movie