Jazz player Hilary Geddes is a young artist in a big hurry. At just 27 she has already won two of the Australian jazz world’s most prestigious awards, plays regularly with the cream of the Sydney jazz scene and will feature in two headline acts at this month’s Sydney International Women’s Jazz Festival.

And she has done all this playing the guitar – an instrument long associated in the jazz and rock worlds with mainly male players. 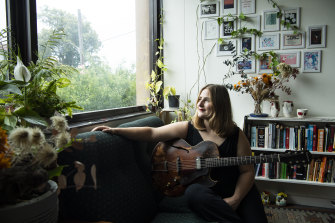 Geddes now calls Sydney home but she grew up in the Riverina town of Griffith, where she was surrounded by music, with a pianist mother and a bagpipe-playing father and family holidays that often centred around trips to Byron Bay’s Bluesfest.

She frustrated her piano teacher with her unwillingness to read sheet music, instead relying on her natural ability.

“I had a pretty good ear I guess and I always felt it was much easier for me to work it out by ear than to read the notes,” she says. “She would try to make me read the notes and I would be a bit stubborn about it.”

She had also picked up the guitar by this stage and gradually it became her main instrument. Eventually, she was accepted into the Sydney Conservatorium after a “horrific” audition, where her lack of sight-reading skills was exposed – and ultimately excused – and began taking her jazz studies seriously.

“It was quite overwhelming,” she says. “I sort of felt like I’d enrolled in an English degree but had never read Shakespeare. People would be name-dropping artists and I would be writing down pages and pages of names. I didn’t even know who Art Tatum was or Herbie Hancock were. I had no idea about the history of jazz in Australia. I went down a rabbit hole of listening to jazz nonstop. It was a big learning curve.

“I left the Con feeling really excited about the guitar and obviously still learning. I had a lot of ideas but didn’t know what I was doing with them.”

Her big break came in January 2019 when she got a call from Sydney-based piano icon Mike Nock, who was putting together a band to celebrate his recovery from a car accident that had nearly taken his life. That gig at Ultimo’s Foundry 616 turned into a legendary night.

“It totally changed everything when I got the call,” Geddes says. “I was absolutely terrified. But it was a really magical night and I think a lot of people heard my name for the first time.”

Then winning the Jann Rutherford Memorial Award later that year allowed Geddes to record an album with her own quartet.

Most recently she scooped the prestigious $21,000 Freedman Jazz Fellowship, which she will use to fund performances and workshops. And this month she will feature in the women’s jazz festival with nine-piece Pharos and the eclectic quintet Visions of Nar.

“It’s been a really, really wild time,” she says.

TV, movies, Find out the next TV, streaming series and movies to add to your must-sees. Get The Watchlist delivered every Thursday.