Lisa Barlow is still trying to process the rumors that her “Real Housewives of Salt Lake City” co-star Mary Cosby is running a cult.

“I’ve never gone down the rabbit hole with Mary. From what I’m told, there’s so much stuff online that is crazy.”

“I’m a member of the Church of Jesus Christ of Latter-day Saints,” the proud Mormon continued. “So, I’ve never really thought too much about what happens at Mary’s church because church is a choice — and people choose to go there.”

Previews for the remainder of “RHOSLC” Season 2 show Cosby, 48, in a heated moment with Barlow over accusations that she operates a cult and refers to herself as God among her clergy. “I worship the god in me!” she cries out to Barlow.

In another scene, Barlow meets with her late friend and Salt Lake City community leader Cameron Williams, who says, “Is it a cult? Yes. Does she call herself ‘God’? Yes.”

While she may not know what goes on behind Cosby’s stained-glass doors, Barlow told us that she trusted the opinion of Williams, who spoke from experience as he had overcome past “spiritual trauma.”

Ex-members of Cosby’s congregation spoke with The Daily Beast for an exposé published last month, detailing their shocking alleged experiences with the religious leader-turned-reality star.

Reformed acolytes claimed that she manipulates members to work for her family’s businesses for little to no pay, drains their bank accounts for personal financial gain and often tells them they will be condemned to hell for “offenses” like leaving the church and not tithing enough.

Cosby has denied she’s running a cult. She has also denied claims that she used money from her congregation to bankroll rooms full of designer clothes and multiple homes across the country. 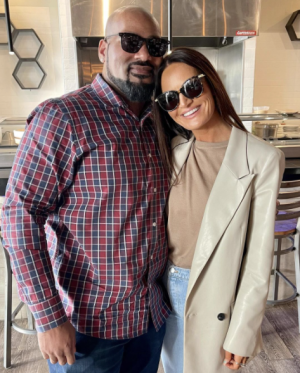 “I’m not judging anyone. I don’t like to do that,” Barlow said of the allegations against Cosby. “But I did hear him and I believe my friend Cameron.”

She added, “When you care about your friends, you listen to your friends. So, I heard everything Cameron said to me. You will see it in upcoming episodes. He was a remarkable person to the point that there are billboards all over Utah saying what a great person he was.”