Cara Delevingne sends a message with her Met Gala 2021 outfit

The bad gal is back — and with her boyfriend to boot.

Rihanna made her epic return to the Met Gal red carpet on Monday night, wearing an all-black Balenciaga outfit that included a voluminous ruffled coat and matching hat.

The “Diamonds” singer, 33, was joined by beau A$AP Rocky, 32, who turned heads in a colorful quilted look by ERL, marking the couple’s red carpet debut.

While Rihanna and Rocky were linked back in January 2020 — after posing together seemingly as friends at the British Fashion Awards just one month prior — they didn’t go public until November 2020, and have been inseparable ever since.

In addition to joining Rihanna in her native Barbados over the holidays in December and calling her “the love of my life” and “the one” in a GQ interview earlier this year, the “Praise the Lord” rapper even occasionally coordinates outfits with his girlfriend.

Arguably one of the most stylish stars on the planet, Rihanna was crowned queen of the Met Ball in 2015, when she stole the show at the “China: Through the Looking Glass”-themed shindig in an instantly iconic yellow Guo Pei couture creation with fur trim and an over-the-top train.

And ever that meme-able evening, she hasn’t taken her foot off the gas (or off our necks) when it comes to her Met styles, having dazzled in a pink petaled Comme des Garçons confection in 2017 and paid tribute to the Pope in shimmering Maison Margiela in 2018.

And while she skipped the party in 2019, signs were pointing to Rihanna’s return this year: As Page Six exclusively reported last week, hospitality bigwig Richie Akiva teased that he and the Fenty founder have teamed up once again to host an epic Met Gala afterparty, to be thrown at a yet-to-be-disclosed location. 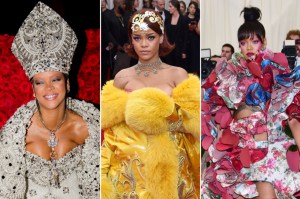