Hey, at least they’re being safe.

Ben Affleck and Jennifer Lopez were spotted together inside the 2021 Met Gala, after Lopez walked the red carpet sans her better half. 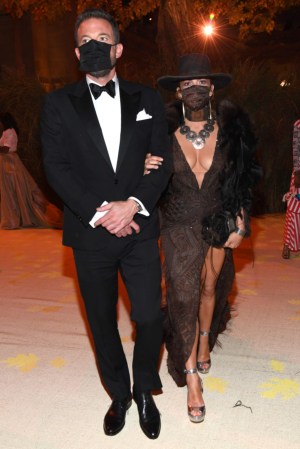 Affleck, 49, was dressed conservatively in a tuxedo, apparently opting to not mirror the 52-year-old Lopez’s Wild West-inspired Ralph Lauren look for the evening.

The pair, both be-masked in accordance with the event’s guidelines, strolled into the event and paused for pictures, including a shot that featured them kissing through their masks, with Lopez clutching her phone. 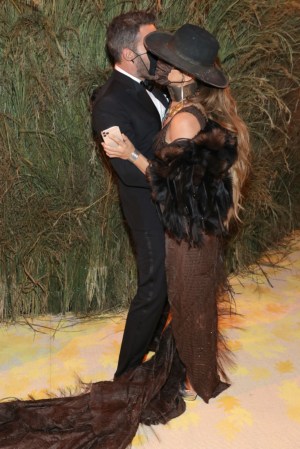 Page Six previously revealed Lopez scored an early invite to this year’s Met Gala, where she’s been a fixture since her first appearance there in 2004.

After arriving in New York following Bennifer 2.0’s official red carpet debut at the Venice Film Festival, Lopez flew solo to make a surprise appearance at the VMAs to present the Song of the Year award to Olivia Rodrigo. 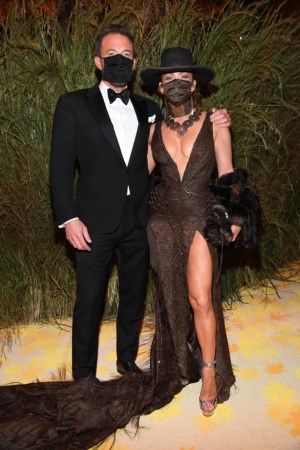 Affleck was even snapped browsing engagement rings at the Century City, Calif. Tiffany’s last month amid the pair’s continuing reunion. Here’s hoping they get further in their engagement than the first time around, when they famously called things off after the consideration of hiring “three separate ‘decoy brides’ at three different locations” proved an epiphany for them.