Hundreds of thousands of unused coronavirus vaccine doses are being rounded up from clinics around Australia to be sent to developing countries before they expire, with one million doses of AstraZeneca being collected from pharmacies alone.

The nation’s COVID taskforce has also asked GPs, Commonwealth-run clinics and Aboriginal Community Controlled Health Organisations to alert them of unused vials as first dose vaccination rates begin to slow in parts of the country. 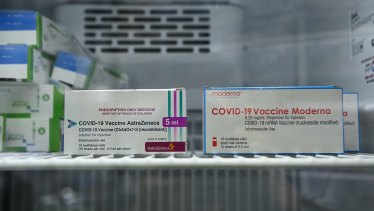 Excess COVID-19 vaccine doses are being collected from clinics around the country to be sent overseas.Credit:Kate Geraghty

Those unopened vials will form part of Australia’s aid to the region, with 10 million doses promised to neighbouring countries including Vietnam, Indonesia, Timor Leste and Papua New Guinea before the end of the year.

So far more than 31 million doses of COVID-19 vaccines have been administered across the country, and 63.4 per cent of the eligible population aged 16 and up is fully vaccinated. More than 2 million doses were administered in the last seven days, and Health Minister Greg Hunt said there were more than enough available to continue vaccinating the nation.

“In terms of vaccine supply, every state and territory has enough to meet all the demand for this week, of next week, the week after, the week after that. So, what we’re seeing is huge volumes of supply, capable of meeting all of the demand,” he said on Tuesday morning.

A taskforce spokesman said the Commonwealth was working closely with providers to make sure the use of vaccines was “maximised and made as efficient as possible”.

“Unused doses are added to the additional AstraZeneca doses, which we supply to the Indo-Pacific humanitarian program,” he said.

Trent Twomey, President of the Pharmacy Guild of Australia, said the industry’s peak body was working with the Commonwealth to return doses that won’t be needed anymore.

“The only AstraZeneca vaccines we are doing right now are second doses. The majority of our first doses have now shifted to Moderna,” he said.

“We’ve probably got roughly one million surplus AstraZeneca vaccines to what pharmacy needs and we are working with the Commonwealth on ensuring the stocks are transferred back to the Commonwealth for humanitarian use.“

Mr Twomey said the doses had an expiration date marked for the end of December, and estimated about 500,000 excess AstraZeneca doses are in NSW pharmacies.

“It will basically be largely Pfizer now. Each GP will have different requirements, but there aren’t many people turning up for first AstraZeneca doses anymore.”

“Indonesia has a vacuum of need for vaccines that is predominantly being filled by China, and yet Australia happens to have millions of spare doses that could save thousands of Indonesian lives,” he wrote in an opinion piece for The Lowy Institute Interpreter.

“In these circumstances, it is in Australia’s interest to be confident and generous in the Indo-Pacific.”