What does “Go to Gate” mean? For those who have forgotten, it is a message that often flashes against your flight on departure boards at those once-familiar places known as airports.

Alas, I have recently been forcibly re-exposed to interstate travel and, through a series of long delays, have had much time to contemplate everything I hate about flying. Well, not the flying part, more the multiple points at which your plans can be derailed, from catching the Uber at one end to arriving at the hotel bar – or, far better, home – at the other. 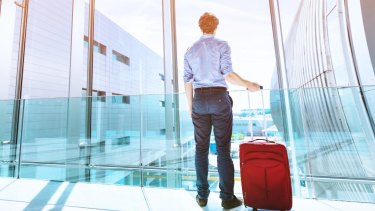 No nuts, no alcohol, just an infinite wait, the instruction to “Go to Gate” doesn’t end well.Credit:NicoElNino / Alamy Stock Photo

“Go to Gate” is a holding pattern instruction. Like the gentle jilt of “let’s just be friends”, it is an invitation to frustration.

“Go to gate” is an airline’s way of creating the impression of movement where none exists. It unreasonably raises expectations. It invites you to leave your whisky and nuts at the bar and rush to the gate to wait in discomfort for an unguessable amount of time.

(I do recognise I have twice mentioned bars as essential to surviving air travel. It is because, like the eye of a cyclone, they offer brief respite from uncontrollable forces. Perhaps that’s why children yell “bar” when they have reached neutral ground in the game of tag: it is clearly some universally understood, Sanskrit-era word for sanctuary).

“Go to gate” always flashes after your brain has been addled by destination deprivation. It is usually deployed after your flight has been inexplicably delayed for hours and you are susceptible to any suggestion of escape.

So it was in Brisbane last week after the hell of navigating an airport with not one but two camera operators.

Camera folk do luggage in the way supermodels do frocks. There is no such thing as too many. They have huge, gut-bustingly heavy, supernaturally awkward bags for machinery that was not designed for travel. Each is filled with exotic equipment, most of which looks like it could easily be fashioned into a bomb. The further afield you travel the more voluminous, dangerous-looking or potentially illegal this kit needs to be. Heading to North Korea? Must take that drone.

I am still scarred by having to help hoist 30 bags though scanners in a country we were “sneaking” into on tourist visas cloaked in the kind of alibi that toddlers concoct. And it is a universal truth that customs officials everywhere are not stupid. They are evil. Each is schooled in the dark art of inspiring guilt in the innocent. Each capable of making you feel like you probably have committed a felony, or will shortly. Or of finding that banana/joint/crack you genuinely intended to consume, or flush down the dunny, before landing.

Anyway, after the ordeal of checking many bags in Brisbane – including the rote conversation of “Yes, our organisation does have an excess baggage arrangement with your airline” and “No, I’m not the least bit surprised that isn’t recorded anywhere on your computer” – we hit security.

There an official, utterly unencumbered by knowledge, decided camera batteries were unacceptable hand luggage. She rejected the entreaty that every airline on earth demands they are carried onboard. Even showing her this instruction on the airline’s website was insufficient. A supervisor was called to escalate the officiousness. We were told to send an emissary back through security to fetch a rare representative of the airline to verify our cock and bull story. One was eventually found. Turns out we were telling the truth and the now engorged security posse, grudgingly, released us.

As the batteries were repacked, we each received that all-to-familiar message from the airline which breezily begins “We have had to change your flight time…” to what is never specified. Our spirits briefly soared as, moments later, we had procured drinks, comfy seats and an endless supply of scorched almonds.

Unfortunately, an hour after our scheduled departure, we were in the mental dead zone where hope overcomes bitter experience.

It was then that the message beside our flight flashed “Go to Gate”. Without thinking we leapt to our feet and rushed off. At the gate nothing happened. It continued to not happen for a long time. There were no seats at the gate “lounge” because the whole plane had been enticed there. There were no nuts. There was no alcohol. There was just uncomfortable nothingness, stretching on into infinity.

It was then it struck me. Post budget, the Australian Labor Party is flashing “Go to Gate”. And the Coalition is already boarding.

Our Morning Edition newsletter is a curated guide to the most important and interesting stories, analysis and insights. Get it delivered to your inbox.

'Power': Shane Johnson Recounts the Embarrassing Events That Earned Him the Role of Cooper Saxe

'Power': Shane Johnson Recounts the Embarrassing Events That Earned Him the Role of Cooper Saxe