This year the greatest drama on reality TV renovation competition The Block is not the onscreen tantrums, cheating scandals or room reveals, but the behind-the-scenes battle to ensure that the housing industry’s supply crisis won’t stop production.

The perfect storm of supply chain issues, material shortages, an employment squeeze and even the invasion of Ukraine is now the greatest threat to the completion of the series in its history, as contestants and crew struggle to build six homes in rural Gisborne South, about 50km north west of Melbourne’s CBD in the Macedon Ranges region. 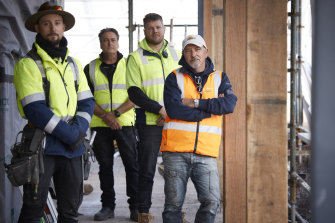 Julian Cress, right, the executive producer of The Block, with tradies and builders from Nine in Six on The Block construction site in Gisborne South. Left to right: Jake O’Brien, Glenn ‘Gmac’ Kiernan and Chris Hughes.Credit:DAVID COOK

The program has been forced to undertake around-the-clock production to avoid missing the completion deadline for the first time in its 18 seasons.

“There are 200 people on this show whose livelihoods are depending on us not stopping,” said executive producer Julian Cress on location in Gisborne South, where six teams are each building a 500 sq m house on 10 acres of land as part of the program’s “tree change” season, inspired by the post-COVID-19 move to the regions.

“The simplest things we can’t get,” Cress said.

Floods delayed fencing materials by two months, while pine stick – used to build housing frames – has soared in price from $3.18 a metre to $9.30. 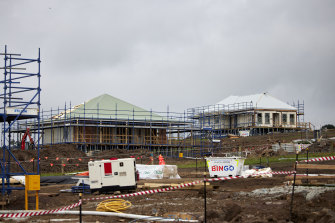 “Last week we did bathrooms and we used all the Sika waterproofing material (a flexible cement-based injection material) in the state of Victoria just to finish our bathrooms in a week,” he said.

Home construction is booming thanks in part to the federal government’s HomeBuilder stimulus, while supply chains are stretched and workers are scarce due to the COVID-19 pandemic.

And Russia’s invasion of Ukraine is squeezing the industry even further. Last year, when The Block built homes in the bayside Melbourne suburb of Hampton, producers used LVL (laminated veneer lumber) products from Russia. These are now banned as conflict timber and will soon be subject to 35 per cent tariffs.

“This has slowed some people to a halt and put some people out of business. We are in a position where we can’t slow down – we have to finish on deadline,” Cress said.

The homes are using Truecore steel frames from sponsor BlueScope.

The program, made by Nine Productions, has 120 filming and editing staff and 80 building staff. It is a big money spinner for Nine, which also owns The Sunday Age and Sun-Herald. Last year contestants shared in prize money of $2.2 million after their renovated homes were auctioned.

But only if it is delivered on time, ready to be aired in August, thanks to network commitments to advertisers and sponsors.

“My gut feeling is the average cost of material is up 50 per cent, labour force is up 15 per cent, we have a skeleton force on the trades and some material is costing more than 300 per cent,” Cress said.

Previously, producers would pick up the phone to suppliers at 9am and receive a delivery by 11am.

“Now we are picking up the phone to suppliers who say ‘We may be able to get that in a month – and no guarantees’,” Cress said.