A union boss has used parliamentary privilege to reveal Uber Eats settled an unfair dismissal case for $400,000, saying it was willing to pay a “life-changing” amount of money to ensure its business model was not overturned.

Transport Workers’ Union boss Michael Kaine also accused Amazon Australia of calling the police on its organisers when they tried to visit the retail giant’s distribution centres, a claim its executives said they knew nothing about. 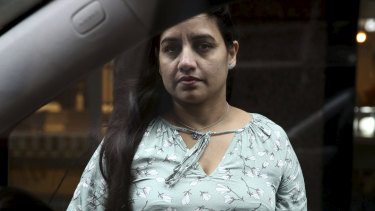 Uber Eats last year settled the unfair dismissal case brought by courier Amita Gupta. If she had won, it could have set a legal precedent that many of Uber Eats’ workers were employees rather than contractors with entitlements to annual leave, unfair dismissal protections and a minimum wage.

Mr Kaine, whose union supported Mrs Gupta in her case, told the Senate Committee on Job Security on Thursday the size of the previously confidential settlement was telling.

“[Uber] were willing to pay an incredible amount of money, a life-changing amount of money” to ensure its “exploitative” system remained in place, he said.

Uber argues its workers are contractors because they can choose their own work hours, decline orders and work for other companies. Regulators and other tribunal decisions have supported that conclusion.

“This matter was resolved by mutual agreement,” an Uber spokeswoman said of the case. She pointed to the previous decisions and noted 87 per cent of its couriers said they valued the flexibility of contracting.

Mr Kaine also claimed police were twice called by Amazon in May 2020 when union officials tried to enter distribution centres to speak with workers, despite giving prior notice and having right-of-entry cards.

Amazon Australia and New Zealand public policy director Michael Cooley told the parliamentary committee he was unaware of the incidents and Amazon was supportive of staff choosing to join unions if they wished.

“Unions regularly enter our facilities. More than a dozen times in the past year … and they are welcome to do so,” he said.

Shop, Distributive and Allied Employees Association spokesman Bernie Smith said the union had sought meetings with Amazon and faced “constant surveillance of any activity we undertake”.

He said in one instance Amazon had contacted the union 10 days after a visit to complain organisers had breached social-distancing requirements.

“Everything we do is under surveillance not only from managers in the room but also CCTV,” he said, adding Amazon had cameras in rest areas, unlike most businesses.

Ahead of Mr Smith’s appearance, Mr Cooley said cameras were installed for security purposes, including for inventory, and any attempt to “sensationalise … [or] suggest we’re doing something unusual or wrong” was incorrect.

Amazon officials denied the company underpaid contractors, including Amazon Flex drivers, or employees and said there were fair avenues of appeal when workers were “off-boarded”.

Amazon maintains it pays a minimum of $108 for a “block” of parcels, which has a four-hour delivery time, and on average pays $120. This works out to $27 an hour as a minimum payment rate before car insurance, vehicle maintenance, insurance and other expenses.

Mr Kaine said the four-hour block payments left only about $3 an hour to cover superannuation, annual leave, insurance and vehicle maintenance to ensure the labour was paid for at the minimum casual wage of about $24.50.

Megan Rapinoe Calls For Equal Pay During W.H. Speech, 'So Much Real Work To Be Done'
Music