You witness a particular kind of squirm in the seat when the storyteller becomes the story. So I can only hope to bring to this interview what I’ve known the Walkley Award-winning journalist to bring to the many she has done – empathy, insight and good grace.

Yet almost immediately I do the exact opposite. I simply can not help myself from subjecting Maley to a stream of speculation about which of our colleagues at the Herald and The Age appear as characters in her debut novel The Truth About Her. 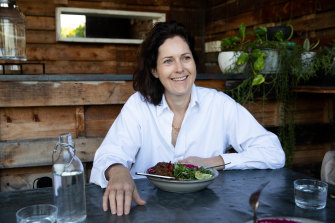 Author Jacqueline Maley’s first novel, The Truth About Her, is out this week.Credit:Janie Barrett

Chain-smoking news director? Easy. A journalist with Capote-ish dreams? I can think of a few. An art critic who finds an exhibition “utterly prosaic”? Well, you’re familiar with Spectrum. Would someone describe me as compact? Could that be me?

I might offer some tips to Nine’s IT department as I’ve had to install serious protection around my copy of The Truth About Her, out this week, so hungry are journalists in the newsroom to get their hands on it.

Of course, it’s an utterly pointless game to play but it’s hard to resist when there’s so much apparent fact in the fiction. Maley shares with her protagonist Suzy Hamilton a career as a journalist, raising a daughter as a single mother, and a home in Sydney’s inner west.

“It made me a little bit nervous and particularly as Suzy does a lot of things that I would never do. I had a very close friend ring up after she’d read the book and be like: ‘Oh my God, have you had an affair with a married man that you never told me about?’ So that kind of thing. I would be mortified to think that anyone would think I had a sex life as interesting as Suzy’s,” Maley says, with the aforementioned good grace.

“I mean the fact is this book is absolutely inspired by my own life. My situation when I was writing, it was a sort of springboard, but it’s a work of fiction and, obviously, everything that happened to Suzy didn’t happen to me. It’s very much a feat of imagination.”

But were you taking notes in the newsroom to record the colour, one eye on writing your weekly column the other on observing the gruff editor who is “respected, and slighted feared, because he is so economical in conversation”? Surely going to work becomes infinitely more interesting and an impossible commission far less frustrating, if it can all be rendered fodder for fiction?

“It’s this beautiful feeling of walking around with a really lovely secret,” Maley says. “Because I didn’t really tell many people that I was writing a book, it was something that was really just mine. So, I had this, it was like having this little secret nestled up inside you, that you walked around with, that no one else could see.”

We’re in the courtyard of Dear Delicious cafe in Dulwich Hill, close to where Maley’s daughter Evelyn has this year started kindergarten. As Maley opts for a cappuccino and zucchini donuts with the nefarious beetroot relish, we discuss the difficulties of Lunch Withs, of which Maley has written many over the years. One of the more challenging aspects for the journalist is the burden of trying to keep the pace of eating in some kind of synchronicity – your interview subject is always far too busy answering your questions to eat their meal. And Maley’s donuts are starting to look slightly soggy.

Maley’s protagonist also finds herself the story. The Truth About Her hinges on Suzy’s investigation into a wellness blogger named Tracey Doran who takes her own life after she is revealed as a fraud. But Doran’s mother, Jan, wants justice for her daughter.

Well, that’s at least the blurb on the back of the book. The real strength of Maley’s novel is the exploration of the love between Suzy and her daughter Maddy. Maley teases out how motherhood can be a constant negotiation between sacrificing and sustaining yourself – all the mess, rage, failure, fear and guilt – and then the clammy, loving little hands around your neck at the end of a long day that makes you forget all of those things. 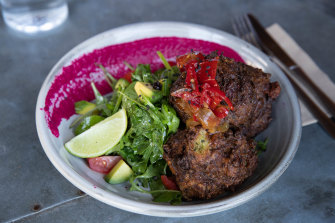 The zucchini donuts and beetroot relish at Dear Delicious in Dulwich Hill.Credit:Janie Barrett

Maley, 43, always wanted to have children and says she would like to have more. She gave birth to Evelyn in 2015 but after her relationship with her partner ended, Maley moved into the upstairs flat of a friend’s art deco duplex in Marrickville and raised her daughter on her own. Single parenthood, she says, has rarely been treated seriously in literature.

It was the personal freedom that Maley missed more than anything. Writing offered a way to let her imagination take the long walks that she could no longer enjoy on a whim after having Evelyn. She had previously completed a manuscript, for a far more commercial novel, but her current publisher at HarperCollins, Catherine Milne, gently encouraged her to treat it as practice. When Maley took long service leave in 2018, she set herself the goal of writing 2000 words a day. In a small sunroom, she found relief both from writing the news and reading it.

”When I’m writing fiction, when I was working on this book and I’m now working on a new one, I turn everything off. I’d get Instagram off my phone, Twitter off,” Maley says. ”It’s like you’re on a different plane and totally different headspace because I just find the constant chatter of news and the constant intellectual clutter of social media is for me, it’s just really antithetical.” 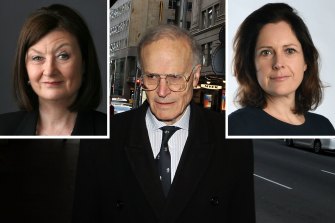 Kate McClymont and Jacqueline Maley won a Walkley Award for their investigation on Dyson Heydon.Credit:SMH

While the tirades of social media may be tiring, Maley grew up in a household that appreciated and encouraged robust arguments across the dining room table. Her father Nick works in IT and her mother Judy, now retired, was a journalist who moved into publicity and communications. They split when Maley was two, and she grew up in Cammeray on the North Shore with her mum and brother Paul, a former journalist at The Australian. Her aunt Karen Maley is also a journalist at The Australian Financial Review. She describes her grandfather Barry as her most beloved person, a lapsed catholic turned socialist, a “reactionary conservative”, who challenged and expanded her mind.

A high achiever at North Sydney Girls High School, Maley chose to study arts law at the University of New South Wales, more because it was what “good girls” did than a long-standing passion. But Maley found it far less fun outside of the school playground. She says the experience of law school was what “radicalised” her and it has continued to influence her feminism and writing.

“I’d come from a very protected environment that was very supportive. And we’d been told, ‘You can do anything, you’re great. You’re the leaders of tomorrow.’ All that kind of stuff. And then I went to law school. I’d never encountered boys or men in an academic environment before. I mean, a lot of them were from very, very privileged backgrounds, and a lot of them were very, very full of a sense of entitlement and their importance. And I sort of took them at their word, and I suffered a bit of a crisis of confidence,” Maley says.

Sought after by the top law firms, Maley chose one for a clerkship only to be disheartened by the gender inequality and corporate conformity. She remembers clearly when the commercial partners invited only the male clerks to take the day off to attend the cricket. Maley, and a female colleague who was also left out, never spoke about it because they were fearful of seeming out of line. 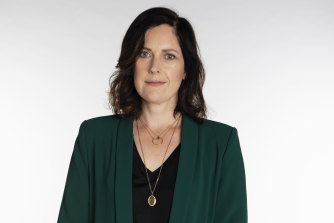 Jacqueline Maley started working at the Herald in 2003 as a cadet.Credit:Louise Kennerley

“I was raised in this really beautiful hothouse environment where I was given all the opportunities and so much intellectual stimulation, and everything I wanted to do with my brain, I was given an avenue for it. And then I was plopped into the real world, and I wasn’t prepared for it. So it took me a long time to realise that I was just as worthy, I was just as smart. And the only thing you had to do really was work hard,” Maley says.

“My dad always says, ‘people take you at your own estimation.’ And I think that girls have a lot of trouble doing that, estimating themselves highly enough. So there are all the reasons why I’m a feminist firebrand.“

After a year abroad – including working at a female-led law firm where she worked in media defamation in Dublin – Maley’s mum sent her an advertisement for a Herald cadetship. It was a fork-in-the-road moment, and Maley decided to apply for the role rather than returning to Australia to take up a position at the law firm. After being overseas for so long, the general knowledge exam proved difficult (what petrol excise?). Maley scrawled at the top of the quiz: “I’ve been out of the country for a year. I don’t know it, sorry.” But when she started at the Herald in 2003, its offices then in Sussex Street, she knew she had found her people.

“I think this was the last vestiges of the old newsroom culture. Now the newsroom is much more professional, and I might add, a much better place for women. I don’t feel that misty-eyed about those old days, but I definitely saw the tail end of it.”

During her time at the Herald and the Age, Maley has spent many column inches teasing out the nuances of gender, politics and power. She won a Walkley Award last year for her investigation alongside Kate McClymont that revealed sexual assault allegations against former High Court justice Dyson Heydon. Her coverage and comment has been significant in prompting conversations about how women and men navigate the workplace.

”I think every woman, really, who’s thinking about this stuff is combing back through her personal history in professional environments, in personal environments, and realising how much they absorbed, and how much they took on, and how much they encountered. And they never gave themselves permission, or society never gave them permission to object to it, or to call it out, or to even recognise it as a traumatic event. And I’ve had those conversations with so many people in the last few weeks. And every woman I know has,” Maley says. 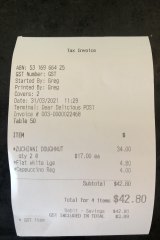 For Maley, it’s been a big year already. There’s a first novel. She’s just purchased a new house. Evelyn is off to school. There’s a solid and happy relationship with Australian Financial Review journalist Michael Roddan, who is turning an old shed into a writing studio for her. Which is perfect timing, as Maley has a second book to write. Just maybe it will feature a Lunch With.

Jacqueline Maley is a guest at Sydney Writers’ Festival.

Tags: a, Around, Lovely, Walking, With
Related posts:
TV & Movies

Why Jennifer Lopez And Alex Rodriguez Have Officially Split For Good

Why Jennifer Lopez And Alex Rodriguez Have Officially Split For Good

What is a COVID-19 vaccine passport, and will I need one?