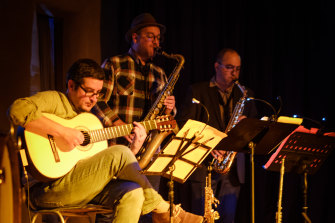 The mix of moods and feelings achieved by Antelodic is rare in any art form.Credit:David Brazil

Sometimes the harmonies reminded you of a Welsh choir, or perhaps a solemn brass band, and then a groove flirted with going bossa nova, but decided to stay chaste. While subtly evading expectations, Robbie Melville loads his music with a restrained melancholy conveying innocence rather than knowingness, the upshot being an unusual emotional ambiguity blending resignation and contentment.

This mix of moods and feelings is rare in any art, because the sadness was untainted by bitterness. Nor did the restraint tip the music into tedium, because the harmonic language was so intriguing and the flurries of improvisation so pithily used by the players. 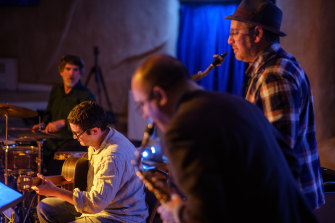 Gone, an ode to Melville’s grandmother (and the piece that cannily sidestepped the bossa temptation), had the tenor and alto spiralling around each other like two unhurried birds, while on Sombrero Fallout the three instruments intertwined more intricately before Brazil’s tenor escaped the maze for a languid solo, deftly charged with a lone heart-shock moment.

On The Last Word, penned for a departed friend, Simmons’ solo began with little frosted notes that were barely enunciated before swooping down to a mighty tenor-like robustness – but just for a moment. Drummer Ronny Ferella joined them for three pieces including Like a Tank (which had a lurching groove akin to the gait of a drunken sailor), Brazil’s breezy Kalimna Akimbo and Melville’s even sprightlier Sparkle and Fade. The concert’s impact would have been heightened further with a tightened duration.

Ferella’s Spartacus Collective (completed by Antelodic’s members) opened the show with soundscapes to spotlight the drums’ capacity for melody. The music was at its most effective when it shrank in volume while expanding in timbral range, as on Hit and Run where Ferella’s mallets sang their song against whispering flutes and electric guitar that barely rustled the air molecules. The denser sections of repeated rolls around the kit became more predictable.