So much has changed since Keanu Reeves first entered the Matrix.

Shot in Sydney when Lana and Lilly Wachowski were little-known young filmmakers, The Matrix was a dazzling sci-fi adventure about computer programmer Thomas A. Anderson aka hacker Neo (Reeves) discovering that everyday reality is a computer-created illusion.

It had groundbreaking visual effects, spectacular martial arts battles and imaginative scenes that would become famous, headed by a spectacular opening battle between black-clad Trinity (Carrie-Anne Moss) and a posse of cops, teleporting via phone line, Neo’s red pill/blue pill choice, his bullet dodge and a famous jump from building to building.

A success on every level when it was released in 1999 – critically, commercially and winner of four Oscars – it inspired countless philosophical discussions about reality versus illusion.

Lines like “Miss-terr Anderssson”, “guns, lots of guns” and “whoa!” have become iconic. 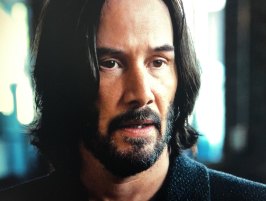 The Wachowskis were suddenly seen as such visionaries that they were able to do whatever they wanted for two sequels that were also shot in Sydney.

They reunited the cast and crew, shot for an epic 270 days and spent more than $US300 million making The Matrix Reloaded and The Matrix Revolutions.

Magazines that had predicted the sequels would be works of cinematic genius carried follow-up stories about “How the Matrix lost its mojo”. 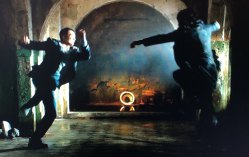 A fight scene in The Matrix Resurrections. Credit:Trailer screen grab/Universal

But the trilogy earned more than $US1.6 billion at the global box office so there was every chance Hollywood studio Warner Bros would push for another instalment.

Since the first movies, Reeves has evolved as an actor who is both an extreme action hero with the John Wick movies and a beloved Hollywood star for sending up his image on screen and his humble decency off it.

The Wachowskis kept making movies together but Speed Racer, Cloud Atlas and Jupiter Ascending never reached anywhere near the same heights as The Matrix.

And now, 22 years after their original hit, Lana has entered the Matrix again.

Without Lilly this time, she has directed The Matrix Resurrections.

Shot in Berlin and California, the fourth instalment has Reeves and Moss returning among such newcomers to the franchise as Neil Patrick Harris, Christina Ricci, Priyanka Chopra Jonas and Yahya Abdul-Mateen II, the Watchmen star who is headed to Australia soon to shoot George Miller’s Furiosa.

While expectations for Resurrections will be more tempered this time – outside Mad Max: Fury Road, precious few long-time-coming sequels have been triumphs – a new trailer suggests it has not strayed far from the original formula.

Set to Jefferson Airplane’s pulsating hit White Rabbit, which shares a fascination with Alice in Wonderland and pills that change your perceptions, the trailer has a shaggier Anderson seeing a psychiatrist (Harris) about strange dreams that are flashbacks to past movies.

He meets a puzzled Trinity, who says, “Have we met?”, and enters a hallucinatory realm where he and a new female character walk through a mercury-like liquid into a room. 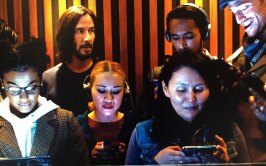 Keanu Reeves as Neo in The Matrix Resurrections.Credit:Trailer screen grab/Universal

There is a rooftop scene with Neo and Trinity, streaming code, agents in suits and shades who can switch faces (though no sign of Hugo Weaving as Agent Smith), blue and red pills, an ominous cat, Matrix-y shoot-outs, stunts and martial arts fights, a helicopter exploding and a character who could be a young Morpheus who also does not recognise Neo.

Even if mobile phones have entered the picture, there is so much that feels familiar in the trailer.

At the end comes a prescient line.

The sentence is unfinished.

Whether going back to the Matrix “is a brilliant idea” or “is just rehashing a great movie because it could make money” will be clearer when Resurrections opens on January 1.

She Cut Her Own Hair! AGAIN!!!! My 6 Year Old Daughter!
Music