In America, Jack London is remembered more for his white-fanged wolves and mad sea captains than his politics, but he was a lifelong socialist – one of the few that American readers would tolerate. He was also an autodidact, and his 1909 novel Martin Eden is something of a self-portrait, the story of a working-class man who becomes a successful writer through self-education, only to become disillusioned.

In Europe, of course, London’s politics are more remembered than his wolves. Martin Eden made the list of Le Monde’s 100 greatest novels of the 20th century. Italian TV adapted it for a five-part series in 1979, and there are two earlier film versions – both long ago. 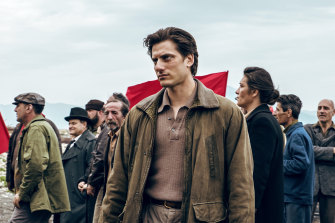 Here, director Pietro Marcello turns it into an Italian saga worthy of high praise, if you don’t mind that it takes a while to find its rhythm. Luca Marinelli plays Martin, a young man of rough manners and keen intelligence, who has been making his way in the world, largely as a deck-hand, since he was 11.

In Naples, he saves a drunken aristocrat from a beating in a dockside fight. The young man’s aristocratic family thank him profusely. Martin falls deeply for the daughter, Elena (Jessica Cressy), who has all the cultural training of her class: she paints, she plays piano, she knows the major works of literature. Martin determines to make himself worthy of her love. He gives up seafaring and hits the books, discovering a talent for story-telling that blossoms into a burning desire to become a writer. Elena keeps reminding him he needs also to make a living but he doesn’t get the hint.

Pietro Marcello comes from documentary and is something of an auto-didact himself – so the film has a personal and idiosyncratic feel. He throws in clips from other films, without much context: we see footage of the Italian anarchist Errico Malatesta kissing a baby, perhaps in the 1920s, but nothing to tell us who this is, or why he features. It becomes clearer later that Marcello is building a kind of jigsaw of meaning, and a jolting rhythm may be part of his strategy. The director grew up in Naples and trained initially as a painter, which is obvious in his somewhat epic staging. He always operates the camera on his films. This one was shot in Super 16mm, which is a bit like writing a novel with a quill. It pays off here: the film has rich archaic colours and a couple of moments so beautiful you’d think Caravaggio was his gaffer.

The film has rich archaic colours and a couple of moments so beautiful, you’d think Caravaggio was his lighting gaffer.

Of course, this being Italy, the film is also a political allegory. Martin flirts with socialism, discovers through reading that he is an avowed individualist, and is happy to stand up at angry meetings of striking workers to denounce the crowd as slaves of the bosses. When his writing finally achieves success, it is as a political oracle – but by this stage, the once teetotal and athletic Martin has become a sodden and sullen millionaire, a loveless writer who writes about the primacy of love.

It’s very much a film of two parts, in which the character is like two different men. It was filmed that way, with a long gap in the middle to allow the actor to change his physical presence.

Marcello also deliberately confuses the period, so he can span much of the 20th century. We see footage of Nazis burning books in the 1930s and a few minutes later someone driving a Volvo from the 1970s. The fight between individualism and collectivism knows no bounds.

So much narrative ambition can be enervating, but Marinelli’s performance is mesmerising. It helps that he is broodingly beautiful, somewhere between Brando and Belmondo – a working-class hero with an explosive temper and bad table manners. As Martin educates himself, his vocabulary begins to match the fire in his belly. His words become like bullets. Marinelli has been in a few earlier films, but nothing this big or demanding. No surprise then that this performance won him best actor at the 2019 Venice Film Festival. A star is born.

THE WATCHLIST
Find out the next TV, streaming series and movies to add to your must-sees. Get The Watchlist delivered every Thursday.

How to make your flowers last longer in the heat