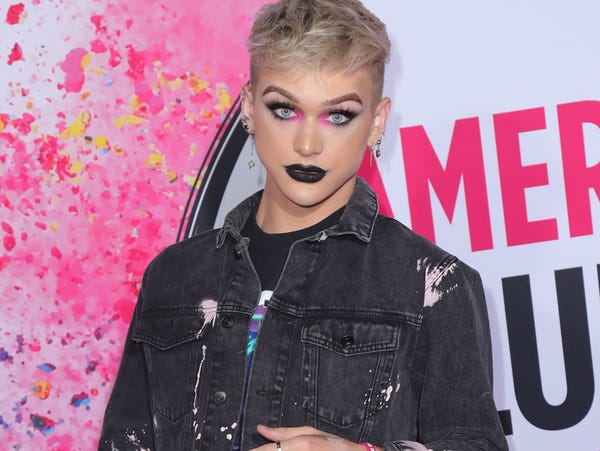 Peters' father confirmed to Fox News that he found Peters' body in his bedroom, while Peters' mother posted a statement to Instagram confirming his death.

"He wanted nothing but to inspire, make people laugh, and push the boundaries of what is acceptable in our world for all young people," his father told Fox News. "He was a kind soul, who accepted everyone for who they were."

With more than 500,000 Instagram followers and 750,000 TikTok followers, viral makeup looks, and appearances at events like the 2019 American Influencer Awards and the launch party for Lady Gaga's Haus Labs cosmetics, Peters was a rising star in the online beauty community. Several notable influencers, including Tana Mongeau, Manny MUA, and Jeffree Star posted tributes to him after his death.

However, as Louise explained to Insider, Peters had struggled with drug abuse and addiction over the last few years of his life, and intoxication sometimes led to him exhibiting uncharacteristic behavior online.

"People need to remember Ethan from early 2019, 2018, who made hilarious viral videos that made so many people laugh, made so many people smile," Louise said. "His makeup looks were incredible. They need to look at his art, his creativity, and how hardworking this kid was. He inspired people."

A few of Peters' controversial posts from late 2019 and 2020, notably those about the musicians Doja Cat and XXXTentacion, have led to so-called "stans" (a portmanteau of "stalker fans" that usually refers to anonymous accounts that post in defense of an artist or celebrity) attacking Peters post-mortem, according to Louise.

Louise told Insider that some of these people have harassed her and Peters' parents online, and many of Peters' last social media posts are overwhelmed with toxic, abusive comments and memes about his death.

While Peters' loved ones are attempting to honor his legacy and educate his followers about drug addiction, they say the internet's cruelty has overwhelmed them

While Peters grew a fanbase of hundreds of thousands of people before his death, he also attracted negative attention for comments about artists like singer Doja Cat or rapper XXXTentacion, who died in 2018.

Some of these artists' fans or "stans" began mocking and meme-ing Peters' death, according to Louise. His tagged photos on Instagram now include memes about his death, some of which are homophobic and depict violence.

Louise says she's been flooded with negative comments on her posts about Peters, and she says she had to teach Peters' mother how to turn off Instagram comments after she experienced an outpouring of online abuse.

One tweet with over 1,000 likes referred to Peters' death as "a win" because of the supposed transphobic and racist views he held, which Louise disputes.

Louise told Insider that one circulated screenshot of Peters leaving an offensive comment using the N-word slur on a Lil Peep Instagram post was fabricated. She also said that a controversial 2019 tweet from Peters about hoping deceased rapper XXXTentacion "was having fun in hell" was in reference to domestic violence claims against the artist.

Meanwhile, other claims— like accusations that Peters had done a "blackface" makeup look based on Doja Cat — she says were misconstrued.

"People are painting a picture of him post-mortem that he was this awful, problematic person," Louise said. "He's not transphobic, he wasn't racist, he was just a 17-year-old who said some stupid stuff sometimes."

"He really was a kind-hearted person with a good energy and spirit, and he just got taken out of context," she continued. "People decided to stop looking at the bigger picture and look at a few small things and are harassing me and his friends and his family after he died to try and destroy his legacy."

Louise believes that a lot of the abusive comments about Peters' death are being written by young social media users, though she says she's also noticed older individuals leaving negative comments about his drug overdose on news articles.

"When you're growing up in school, you learn about cyber-bullying, but children don't get that, I don't think, because I certainly don't think I did," Louise said. "But I didn't grow up on the internet. I think they're not grasping the permanence and gravity of death and how Ethan was a person."

Louise said that both she and Peters have experienced adverse effects on their mental health in the wake of going viral, including targeted harassment from anonymous accounts online.

"People look at us as these pictures that they see, these videos that they see, like we're not real and don't have a family and a life. They would never do it to someone they know, to someone with a couple of hundred followers," Louise said. "They think they have no impact on us because we're so big."

Louise says she understands the impulse to make memes about a famous online figure's death, but it's too much for Peters' parents to handle.

In her statement, Peters' mother addressed the online toxicity, writing, "Those people didn't know him, just followed others spewing bulls— like little annoying flies drawn to the stench. Ethan was by no means an angel, but he was an awesome kid that we both – got frustrated with and were so proud of – frequently at the same time. He was smart, kind (to those who deserved it), utterly talented and absolutely beautiful. We love him with all of our hearts and our world will never be the same."

I am absolutely not my son when it comes to social media, but I could hear him yelling at me to do this…because, well that's Ethan!!!! I want to give a special thank you to @avalouiise and @nicolettegray you two are my angels in all of this online chaos…and to my little local angels that have made sure we have everything we need. Now the hard part… I want to say thank you to everyone that has sent Ethan's dad and I their messages of love and support. I was able to get through some of them this morning but it will take me a bit to get to them all. To hear your stories of how my son affected your lives through encouragment, kindness and laughter has been absolutely overwhelming! To hear how he helped some of you through shitty times to how he inspired you to be you! And to hear about so many of you all having his back (and mine and his dad's) when it came to the ugliness of the internet has been magnificent! Those people didn't know him, just followed others spewing bullshit like little annoying flies drawn to the stench. Ethan was by no means an angel, but he was an awesome kid that we both – got frustrated with and were so proud of – frequently at the same time. He was smart, kind (to those who deserved it), utterly talented and absolutely beautiful. We love him with all of our hearts and our world will never be the same. Be you…"be unapologetically yourself" fingers up and live life to the fullest extent! I

Some of the negativity over Peters' death has revolved around it being a suspected drug overdose. Louise posted online that Peters died after taking two Percocet pills, which are prescription Oxycodone pills, a type of opioid.

Louise told Insider she thought the internet had moved past the stigmas associated with addiction, particularly in light of celebrities like Demi Lovato openly talking about their sobriety, but now realizes that isn't the case.

"It's horrific. I've seen meme after meme, like 'Ethan when he took the two Percs' and pictures of coffins," Louise said. "This is a real way people die, and his story needs to inspire and educate people and not be made into a joke."

Louise wants her friend's death to, in part, serve as a reminder to avoid the recreational use of opioids — particularly popular recreational pills like Xanax and Percocet — as well as to get drugs tested before consuming them.

"I have never had a friend like Ethan Peters. He was the most caring, loyal friend who always had my back," Louise said. "Ethan was so kind. He was kind to everyone who deserved it, he was probably the most loyal person, and I want people to take that quality of his and be inspired by it and act like that."