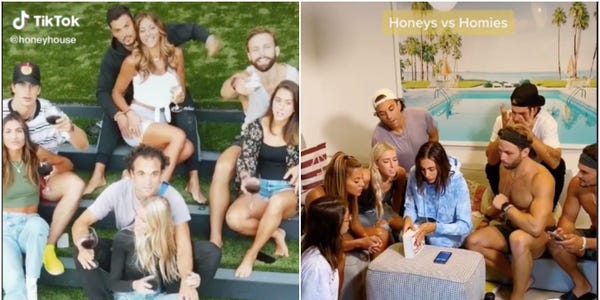 In recent months, so-called "collab houses" have become a major trend on TikTok.

Whether it's The Hype House or The Sway House, the groups are usually synonymous with young teenagers living it up in sprawling Hollywood mansions while pumping out short staged skits, viral dance videos, and a lot of drama.

But The Honey House is different.

Made up of six adult couples in their 20s— whose professions range from "mindset and motivation coach" to "model and fitness trainer" — the collab collective calls itself the "oldest house on TikTok."

Its members include former professional hockey player-turned-fitness influencer J.T. Barnett who came up with the idea earlier this year with friend and brand strategist Nick Dio. Barnett is dating fitness influencer Sami Clarke, while Dio is with e-comm specialist Erin Falter.

Other members include Evan Betts, an NYC-based fitness coach who is partnered up with fitness model Dina Khoury, and motivational speaker Nick Pags, who is in a relationship with mindset coach Beatriz Boas.

While the 20-somethings still produce content that includes popular TikTok challenges and hopscotch dances, the Honey House is looking to stand out by focusing more on "health and wellness," according to co-founder Barnett.

"Our brand is a health and wellness focus, and I know people identify with fitness as, like, moving your physical body, but wellness for me encompasses also, like, community, and caring for others, and spreading positivity and kindness," Barnett told E! News.

"So we wanted to embody all of that into a brand and into the house. So, all of the content that comes underneath that identity is things like lighthearted challenges, tips, and tutorials on how to move your body more properly, or how to sit and meditate at a beginner level," he added.

According to their very first video on the platform, the group moved into a mansion in Los Angeles in August to "spend quarantine in one place where we can pump out content and just have a good time."

But not everyone is too keen on their content. One video in particular, which gave viewers a behind-the-scenes look at what the creators did on an average day, went viral in September.

It showed the couples alternate between working out, doing photoshoots, and pumping up people over the phone as part of their "mindset and motivation" coaching.

Watch the clip below:

"Sincerely, the worst thing I've ever seen", comedian Jack Wagner tweeted in response to the clip, which received more than 86,000 likes.

Even actor Seth Rogen chimed in, jokingly adding: "F***, they cut me out."

But the Honey House members have not been deterred from the criticism and already have ambitious plans for "Season 2", which is due to start on October 19 and will introduce a new house and new cast members, Barnett told Insider.

"In season one, you can only do so much when you're trying to wear a ton of hats," Barnett told E! News.

"So the content that we were able to put out was the ones that we ended up getting around to, but I have a handful of different concepts that we're coming up with now that will really show a little bit more personality from each of the couples, and kind of dive into who they are and what they do and what they represent," he added.

‘DWTS’ Recap: One Couple Is Eliminated After Bruno Tonioli Breaks A Tie Between The Judges
Music

‘DWTS’ Recap: One Couple Is Eliminated After Bruno Tonioli Breaks A Tie Between The Judges

Kevin Hart on Stepping Into Jerry Lewis’ Shoes as MDA Telethon Host: I Hope to ‘Walk in Them Correctly’