Hugh Hefner's famous Playboy magazine launched on December 1, 1953 – and some of the biggest stars in showbiz graced its covers over the years.

When the late media mogul founded his controversial glamour mag, he only printed 54,000 copies as he wasn't sure if it would be a hit.

However, Playboy would go on to see the likes of Kim Kardashian, Pamela Anderson and Kate Moss sizzle on its glossy covers over the years, before it finally stopped printing last year.

The Playboy Mansion owner passed away at his lavish Los Angeles home on September 27, 2017 at the age of 91 as a result of sepsis brought on by an E. coli infection.

To mark four years since Hugh Hefner passed away in 2017, the Star have rounded up the most iconic Playboy covers of all time.

I'm A Celeb star Katie Price stripped down for a topless photoshoot when she appeared on the cover of Playboy's September 2002 issue.

The former glamour model truly brought the heat in the saucy snap as she posed under the notorious heading: "London’s legendary bad girl Jordan."

The reality star could be seen covering up her chest as she donned a silver corset belt and belly chain that said: "Fox."

The mum-of-five previously revealed she'd take part in another Playboy shoot, before the magazine closed down last year.

Katie had told The Sun: "I did the cover shot for American Playboy before, the editorial by the way, not the Playmate. So yes I would do it again".

Baywatch babe Pamela Anderson has made Playboy history after gracing its covers more than any other star.

The blonde beauty posed for the mag across a whopping three decades after making her debut as a cover girl all the way back in 1989.

During her famous Playboy reign of 22 years, Pamela has stripped down for steamy nude solo shoots as well as joining her stunning Baywatch co-stars in their racy red swimsuits.

Pamela showcased her sex-symbol-status once more when she posed topless for the January/February 2016 issue – which was the glossy's last issue featuring nude models.

For the eye-popping photo, Pamela flaunted her foxy body once more as she wore a steamy "sex" choker alongside the heading: "Pamela: A revealing return to the mansion."

Pamela joined her fellow Baywatch stunners who sizzled on the June cover in 1998.

The beauty and her pals were branded: "The Babes of Baywatch," as the coastal cohort oozed sex appeal in their famous red swimsuits.

Pamela stood with Yasmin Bleeth, Carmen Eletra and Gena Lee Nolin as the lifeguards placed their hands on their hips for a seriously iconic cover.

The glossy bagged itself a huge star when they cast Kate Moss for its 60th anniversary issue in 2014.

The 43-year-old supermodel flaunted a fluffy white tail as she wore the iconic Playboy Bunny outfit for the sultry kneeling-down shot.

He said: " This is a massive global brand. You need a global icon in order to celebrate that – that was the impetus.

"You're talking about the face of Burberry, the biggest supermodel in the world on the cover of Playboy. She's the perfect partner for us to help launch the next 60 years.

"It started with Marilyn Monroe on the cover of Playboy 60 years ago, an icon for her time. Now we've got Kate Moss!"

In 1985, Madonna had embarked on her first concert tour in North America – and she'd begun a sparkling film career.

The star had played the title role in the 1985 comedy, Desperately Seeking Susan, which was hailed by film critic Vincent Canby as one of the top ten films of the year.

However, later that year a series of nude photos were released of the singer in Playboy magazine – shots which had been taken when she moonlighted as an art model back in 1978.

The star was reportedly paid as little as $25 (£20) a session and the issue sparked a media uproar, but Madonna remained "unapologetic and defiant".

Madonna's headline read: "Unlike a virgin… for the very first time."

Kim Kardashian sizzled in a sheer red bikini as she appeared on the cover of Playboy's December 2007 issue.

The reality TV icon flaunted her internet-breaking behind for the Christmas edition next to the header: "New sex star Kim Kardashian takes it all off."

Kim came to regret the shoot in the years to come, though, saying that her mum encouraged her to say "yes" to the opportunity.

She told Harper's Bazaar in 2010: "I’m sorry I did Playboy. I was uncomfortable.

"[My mum said] 'Go for it. They might never ask you again. Our (reality TV) show isn’t on the air yet. No one knows who you are. Do it and you’ll have these beautiful pictures to look at when you’re my age.'"

None other than Hollywood icon Marilyn Monroe appeared on the cover of Playboy once, but she never actually posed for the publication.

Sex symbol Marilyn was splashed on the first ever edition of Playboy back in 1953.

The stunning actress was pictured beaming as she waved her hand alongside the header: "First time in any magazine, full colour, the famous Marilyn Monroe nude."

Marilyn's nude photos were actually taken in 1949, when Monroe stripped off to be photographed by Tom Kelley in exchange for a mere $50 (£40).

Monroe later admitted: "I was nervous, embarrassed, even ashamed of what I had done, and I did not want my name to appear on that model release."

For more of the latest showbiz news from the Daily Star, make sure you sign up to one of our newsletters here. 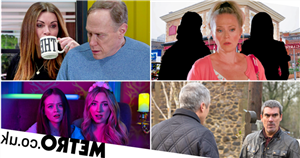