Peter Hook is nervous. The former bass player with Joy Division and New Order, two of Britain’s most influential post punk bands, is about to perform to a sold out audience at London’s Royal Albert Hall.

Hook – or "Hooky" as friends and foes call him – doesn’t look like a man who usually suffers anxiety. A robust 63-year-old with steel grey hair and a clipped beard, his menacing onstage persona is built around a low-slung bass and a thousand-yard stare. In person, he exudes Mancunian charm, peppering his conversation with a succession of cheerful F-bombs.

It seems unlikely he’s suffering from stage fright. Since buying his first bass in 1976, the day after attending a gig by the Sex Pistols at Manchester’s Lesser Free Trade Hall, he has played hundreds, possibly thousands of shows with Joy Division, New Order and a handful of less celebrated outfits including Revenge, Monaco and his current band, The Light. 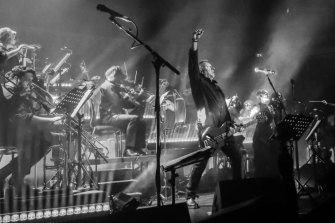 But tonight is different. Hook is about to debut a new project called Joy Division Orchestrated. Backed by an orchestra, The Light and three guest vocalists – one of whom, Bastien Marshall, is the spitting image of Joy Division’s Ian Curtis – Hook will perform some of the band’s best known songs including Isolation, She’s Lost Control and Love Will Tear Us Apart.

He knows he is playing with fire. Joy Division’s eerily plangent songs and the circumstances surrounding Curtis’ death [the singer took his own life in 1980 at the age of 23] have elevated the music beyond the realm of mere appreciation. Joy Division is part band, part myth; an unimpeachable fragment of pop culture frozen in time.

When Hook began playing Joy Division songs with The Light, 10 years ago, there were rumblings of discontent from some of its most ardent fans. His former band mates in New Order – an outfit that has mostly eschewed Joy Division songs in its live set – made it clear they are uneasy about some of Hook’s excavations of their shared back catalogue. 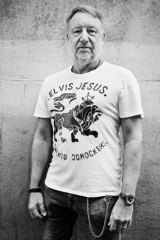 Peter Hook hopes the show will be as delicious as the originals.Credit:Julien Lauchaussee

His response is a mixture of defiance and defensiveness. “The expectation around Joy Division is really high and it can be quite abusive and destructive,” he says. “It doesn’t stop me, of course. It’s a ridiculous concept that you shouldn’t be allowed to play your own music. And you’re never going to please everybody – it’s a minefield.”

He pauses for an instant. “I don’t want to upset people and I am sensitive to criticism,” he says. “I know I’m taking something that people adore and deconstructing it in the hope that when I give it back to them they think it’s as delicious as the original.”

He was once firmly opposed to the idea of orchestrating Joy Division’s slim oeuvre (the band’s reputation largely rests on two albums, 1979’s Unknown Pleasures and Closer, released two months after Curtis’ death) he insists. He changed his mind after working on Hacienda Classical, a series of concerts comprised of orchestral versions of the thumping acid house and rave tunes played at The Hacienda, the notorious Manchester nightclub bankrolled by New Order. Tim Crooks, the conductor of Manchester Camerata, the orchestra that performed Hacienda Classical, was adamant the same approach could be applied successfully to Joy Division.

“Tim kept saying we should do Joy Division. I’d say, ‘in your dreams – no chance’,” says Hook. “I didn’t fancy it and I was happy playing the songs with The Light. But after four years of doing Hacienda Classical and seeing the treatment the tracks received, I began to think ‘that’s not bad’. The orchestra brings out certain aspects of the songs that I wouldn’t have thought of.”

The new project is first and foremost a tribute to Curtis, he says. It includes Higher, Higher, Higher Love a new song built around an audio clip of Curtis discussing his band. Written by Hook and David Potts, his friend and partner in Monaco and The Light, the tune is based on an obscure 1978 recording of Joy Division and the Manchester post punk band Section 25. 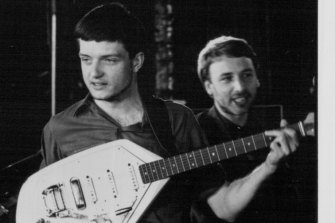 The show is a tribute to the impact of Ian Curtis (left) with Peter Hook in Joy Division.

“The song is about Ian’s impact on me,” says Hook. “It’s a way of saying you went to places that I’ll never go. It struck me that people love his work and love him as a person, but it’s a higher kind of love in the same way you get with Kurt Cobain, Janis Joplin and Jimi Hendrix, people who stay young and frozen in time.”

The concert salutes Curtis is less direct ways. A snatch of Rachel’s Song from the 1982 movie Blade Runner references the film’s source material [and Curtis’ favourite book] Do Androids Dream of Electric Sheep? The inclusion of Beethoven’s Funeral March is a nod to A Clockwork Orange, his most cherished film.

Curtis isn’t the only fallen comrade commemorated by Joy Division Orchestrated. A mash up of Love Will Tear Us Apart and Neil Sedaka’s Love Will Keep Us Together was inspired by a track created by the late Malcolm McLaren. “I wanted Malcolm to be part of it for the simple reason that when I walked into the Lesser Free Trade Hall on 4 June, 1976 with 50p in my hand I gave it to Malcolm McLaren,” says Hook. “He was dressed in black leather with his shock of red hair and he gave me my ticket. Some 40 years later he’s my hero. A tainted hero in some ways, but a hero nonetheless.”

The roster of people in Hook’s musical orbit who have passed away before their time is sobering. It includes Martin Hannett, the producer who gave Joy Division its other-worldy sound and Rob Gretton, manager of both Joy Division and New Order. Both men died of heart failure in their 40s. Tony Wilson, the TV presenter and part owner of Factory Records, the label that signed Happy Mondays as well as Hook’s former bands, also died of a heart attack. 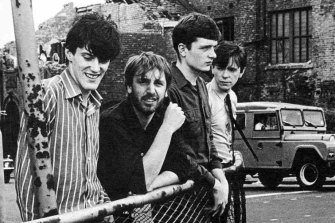 Hook might easily have gone the same way he admits. In Substance, his funny, harrowing account of his time with New Order, the band’s collapse and the acrimonious aftermath, he describes a booze and drug-fuelled hedonism that would make Ozzy Osbourne blush. At the peak of his addiction in 1994, he wed the English TV comedian Caroline Aherne and says she abused him throughout their short-lived marriage. “She’d come at me like a screaming banshee,” he writes in Substance. When Aherne picked up a kitchen knife during one of their tempestuous arguments he thought he was going to die.

Is he lucky to have survived it all? “Yes,” he says without hesitation. But he hasn’t touched alcohol for 15 years and his only addiction nowadays is the gym. The man who once went on three-day benders spends six hours a week lifting weights and relishes a 10km run. He is happily married to Becky, his third wife, and keeps his demons at bay with a mixture of yoga and mindfulness.

His son, Jack, plays bass with the American band The Smashing Pumpkins and his daughter, Heather, will accompany him when Joy Division Orchestrated tours Australia. “I’m a cocaine addict and I’m an alcoholic so I have to be careful,” he says. “One thing I’ve learned over the years is that you have to respect your addictions or they’ll kill you. I was lucky. I kept my wife, my family and my job. I managed to keep going and actually become happier which is … weird.”

He hasn’t escaped entirely unscathed. Bending over to chisel away at a bass suspended just above his knees has left a legacy of trapped nerves and inoperable deformations of his spine and pelvis. “One of my arms is longer than the other,” he says jumping out of his chair to exhibit his lop-sided limbs.

A shattered relationship with the other members of New Order is another painful reminder of four decades on the indie rock frontline.

The exact causes of one of music’s most bitter splits are contested, but Hook’s unilateral declaration in late 2006 that New Order had broken up, created a deep rift. Front man Bernard Sumner, drummer Stephen Morris and keyboard player Gillian Gilbert responded by hiring a new bass player and going back to work; Hook took them to court.

“I felt betrayed when New Order reformed the way they did,” he says. “After 31 years to take your life’s work, value it and give you what they thought you were worth is not the correct way to do things. That will never change.”

Nowadays, he uses the press to take regular pot shots at Sumner, Morris and Gilbert. He has accused his replacement, Tom Chapman, of “miming” and describes any suggestion that he doesn’t own the distinctive bass sound on New Order’s records as “the most disgusting thing I’d ever heard”.

The main target of his ire is Sumner, a school friend who shared his love of music and motor scooters. In Substance, the man he calls "Barney" is variously described as a penny-pinching control freak, a “dictator” and a “mardy-arsed lead singer”.

Sumner’s response, in his memoir, Chapter and Verse, is relatively restrained. He describes the rift with his former friend as “an imaginary rivalry” and insists the band is better off without him. “New Order have moved on and I’ve moved on,” he writes.

Has Hook moved on? Perhaps. He insists life is good but his relationship with New Order is “still way below zero”. The latest in a long stream of letters from the band’s lawyers arrived just 10 days ago.

How would he respond in the unlikely event he was asked to rejoin New Order? “I’d say no,” he says. “Our arguments are still very bitter and the wounds are still very raw. Maybe if we could have peace for a year it would be different. But there’s been no peace.”

The long-running dispute has taken a heavy toll on his finances. He still has to work for a living he says because the legal battle “has taken everything I had”. For the first time in our conversation he looks crestfallen. “It’s heartbreaking because it’s reached no satisfactory conclusion,” he says.

He brightens in an instant. “I have to realise my role in the world and it’s a great role. I know that when I play people don’t want to hear about what a bad time I’m having. They just want to get their rocks off. They’re thinking, ‘shut the f— up Hooky and play the f—ing tunes.”

Joy Division Orchestrated will play the Sydney Opera House on August 2, Perth Concert Hall on August 9 and the Plenary Theatre Melbourne on August 11.