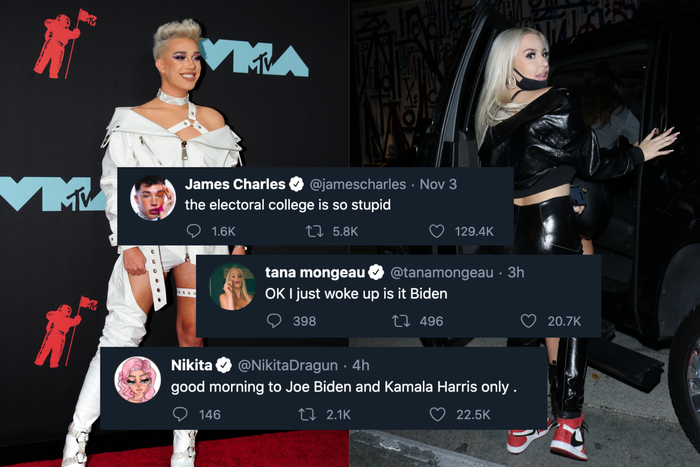 Before 2020, you probably wouldn't know who your favorite YouTuber was voting for, if they voted at all .

This wasn't necessarily such a bad thing for their follower counts, YouTubers FouseyTube and Swoozie told Insider in June 2020, because sharing your political party or endorsing a specific candidate has previously led to major subscriber losses from fans who sway the other direction.

As November 3 approached and passed, "Election Twitter," AKA all the real-time reactions, analysis, and takes (both hot and cold) served up in 280 characters, became a frenetic, toxic pile of tweets. Influencers and their thoughts fit right in this year, as formerly apolitical YouTubers weighed in on the close race between Trump and Biden.

Nikita Dragun, a 24-year-old beauty influencer with 8.5 million Instagram followers, said she voted for the first time on November 3, as she informed fans in a video on her Instagram story. Then, on November 4, Dragun woke up and tweeted the following: "good morning to Joe Biden and Kamala Harris only ."

"Good morning to 'x'" is a popular meme format, usually signifying someone's big accomplishment or a general feeling of appreciation. By one interpretation, Dragun appeared to already be insinuating Biden and Harris won the election. Alternatively, she could have been in the mood to praise them. Either way, more than 24,000 people liked the sentiment.

Back in 2018, during the midterms, Dragun tweeted nothing political at all. She also appears to have deleted her tweets from November 2016 and before, possibly because Dragun has been routinely controversial. Most recently, she faced blowback for a tweet asking her followers "what race" she should be that day, since Dragun, who is mixed-race, has been repeatedly accused of artificially darkening her skin.

A third interpretation of Dragun's "good morning" tweet is that she was hoping that by name-dropping the Democratic ticket, she'd appeal to her liberal, politically engaged following to counter the way she's offended them in the recent past. After all, celebrities have almost always been supportive of voting in general, since it's a non-controversial stance to push democratic participation. Supporting Biden and Harris is a little bolder, and could reap a bigger reward.

Another case study of influencer politicization is 22-year-old YouTuber Tana Mongeau, who pivoted from apologizing for racist microaggressions in September to dodging accusations of election fraud weeks later after she offered to send free nude photos of herself to fans who proved they had voted for Biden.

Mongeau told Insider's Lindsay Dodgson she was being sarcastic about the nudes, although she did encourage her followers to vote for Biden and even posted a provocative, half-naked photo of herself with Biden's face superimposed over hers. On November 4, Mongeau said, "i'm not saying my ass pics did anything but," as Biden continued to narrowly pull ahead of Trump in early elections results.

Hours before, Mongeau had tweeted "OK I just woke up is it Biden," a question that's perhaps better asked of Google than hordes of teenage-led YouTube stan accounts. But Mongeau's most evocative post-election tweet was when she quote-tweeted an October interview with Senator Bernie Sanders in which he appears to eerily predict the uncertainty of the mail-in vote count on November 4.

"I fw bernie," Mongeau wrote, which translates to "I f— with Bernie," or "I like Bernie."

Prior to this year, Mongeau was largely apolitical, although she voiced her distaste for Trump way back on November 8, 2016, when she tweeted "IF U CAN VOTE f—in vote !!!! DO U WANT DONALD F—ING TRUMP AS UR PRESIDENT." She tweeted nothing about the midterms.

Finally, there's 21-year-old beauty YouTuber James Charles, who actually did tweet about the 2018 midterms — although he didn't endorse anyone or any party. "If every single one of you 18 or above isn't voting tomorrow I'm going to be very sister sad," Charles cautioned his fans in 2018.

But Charles has been in rare form during the 2020 election. "The electoral college is so stupid," he proclaimed on November 3, to the tune of 130,000 likes. Political theorists, data scientists, and politicians have made cases against the Electoral College too, so Charles may be at the forefront of translating political theory for teenagers.

Charles also live-tweeted ("this is so scary to watch holy f—") and even adjusted his signature greeting ("Normally I say good morning but it is not a good morning") during Election Day and the day after, but Charles' most high-energy political discourse this cycle had to be his clash with Trump supporter and YouTube commentator Keemstar.

The tweet got over 170,000 likes. The fact that YouTubers are getting significant engagement and positive reception on pro-Biden posts — leading to more participation on "Election Twitter" — just goes to show that influencers and politics don't necessarily mix poorly these days. It seems like there's room to capitalize on political participation, at least in terms of clout. It's only a matter of time before a YouTube star runs for office.

50 Cent Mocks Randall Emmett Amid Abuse Allegations Against Him