“At some point,” says Professor Brian Cox in that mild, musing way he has, “we will be Martians. That’s clear to me, because we can’t stay here forever. The great challenge on Earth at the moment [is] to manage an expanding population and a civilisation that requires frontiers, both intellectual and physical. And it is true to say the solar system contains virtually infinite resources.”

Cox is here ostensibly to talk about his new television series, The Planets, but no subject is off the table. Of course, he goes on, it is important to take care not to contaminate any microbial life there might be on Mars now. “And we are extremely careful. It’s called planetary protection and we take it very seriously. At the same time, I don’t think that can stop us from going to Mars. There is nowhere else humans can plausibly go to begin their step outwards.” 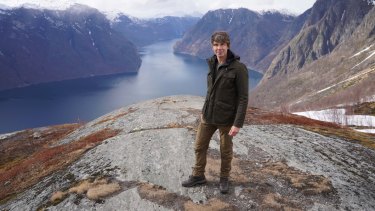 Ten years after he made the landmark Wonders of the Solar System, Cox is presenting this hugely handsome series of five programs interpreting the latest welter of information coming from space probes.

The series delves into the 4 billion-year history of the solar system, the sometimes perilous movements of the spheres – Jupiter nearly snookered Earth on its way towards the Sun, only to be stopped in its tracks by Saturn’s gravitational pull – and tots up current knowledge about what other solar systems might be like.

Cox toils up alpine outcrops thought to resemble craggy Saturn as he talks about that planet’s history. Wadi Rum in Jordan stands in for Mars. I want to point out that virtually nobody lives in Wadi Rum either and it’s a lot handier than Mars. But you don’t want to quibble about tiny things, given the massive scope of Cox’s subject.

What he would do if he had a TARDIS? He takes this question entirely seriously. “If I could go through space and time, I would like to see Mars when it had oceans!”

Then he shares something he discovered on a visit to NASA to make a commemorative program about the Apollo 11 moon landing, which is that all astronauts now have to be bilingual in English and Russian. “Because nobody now, not even the United States, mounts missions on its own. They don’t envisage a future where they will not be collaborating with Russia and the European Space Agency  and most likely China as well.” Who knew? 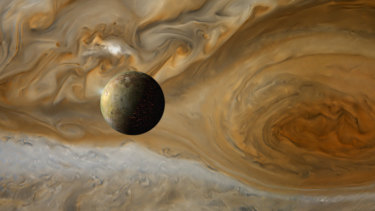 Io is one of Jupiter’s closest moons. Despite being only 3500km across and billions of kilometres from the Sun, it is the most volcanic place in the solar system.

What he hopes the ordinary home viewer will glean from this series is an understanding of the solar system as evolving. Its existence, like the existence of life, is the result of a long series of random events so unlikely that it is astonishing it happened at all.

“Even the layout of the solar system might be quite new, in fact,” he says. “The more we learn, the more remarkable it seems. You can go right back to little collisions of grains of dust in the formation of the solar system. Even the laws of nature themselves may have crystallised randomly out of the Big Bang. If you look at the story of the solar system, you think well, there are actually a lot of things that had to happen to keep this planet stable to support evolution over billions of years. Humans are incredibly unlikely.”

Not only unlikely, but insignificant.

Cox always seems to be dealing with physical entities and lengths of time so overwhelmingly huge that they serve to make us know how small we are. Nevertheless, he points out, the rarity of life means we can reasonably see ourselves as special.

“There is an idea that increasingly interests me – and I think it goes back to Kant – which is that there are ideas which seem mutually exclusive but in exploring them together you are led to a deeper understanding of something. The idea that we are physically insignificant and yet perhaps valuable because of our rarity, those two things, gets you into interesting terrain: what it means to be a human being, to live a very small and finite existence, in a vast, impossibly infinite universe. What is the point of that?” 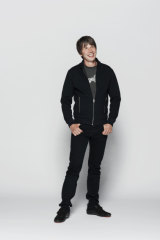 Following his current Australian tour, Cox will return to Melbourne in November with conductor Daniel Harding to present an evening of cosmology set to music by Haydn, Brett Dean, Beethoven and Mahler that deals with exactly that puzzle. “Gustav Mahler, certainly towards the end of his life in the ninth and 10th symphonies, was exploring what it means to live a finite life, which is surely one of the most central questions,” he says.

“We all ask that question. The thing is that cosmology provides the necessary framework to begin to explore it.

"I say in my live shows I can’t tell you the meaning of life and if I knew that, I’d charge a lot more for a ticket. You won’t find meaning at the end of a telescope. But I can say that these are things it is necessary to know.”