Actor John Jarratt felt "pure dread" after learning he was accused of raping a former housemate more than 40 years ago.

Mr Jarrat says it was a consensual encounter in the Sydney home he and his first wife shared with his accuser.

The Wolf Creek actor, found not guilty of the alleged rape in the NSW District Court earlier this month, will appear on Nine’s 60 Minutes program on Sunday night along with his wife Rosa Miano, whom he remarried in 2016, 27 years after they originally separated. 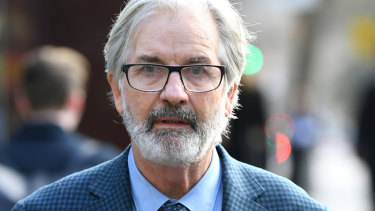 The couple allowed 60 Minutes to film them for the past six months, including during the week-long trial. Producers said they were granted unprecedented access to Jarratt’s legal team for the story.

In the program, which airs on Sunday night, Jarratt is brought to tears as he tells reporter Tara Brown he found out about the accusation in a phone call from his then-agent on November 17, 2017.

"When I’d finished the call, I just sat there," he says.  The feeling was "dread, pure dread".

He recalls daughter Zhadia noticed and tapped him on the shoulder, asking what was wrong.

"I said, 'It’s really bad. This is really bad. I’ve been accused of rape, and it’s going to be in the newspapers'."

The story broke the following day in News Corp's The Daily Telegraph, which Jarratt is now suing for defamation.

Jarratt's 60-year-old accuser, who was 19 in 1976 when she alleged the rape occurred (Jarratt was 24), reported it to police in 2017. She told the Herald last year she had felt empowered to come forward after seeing former Hey Dad! star Sarah Monahan speak out about being sexually abused, along with the accusers of Harvey Weinstein.

The woman claimed Jarratt, smelling of alcohol and wearing a long black leather coat, entered her room about 3am and woke her by pulling off her sheet and blanket. She said he ripped off her T-shirt and underwear, pinned her down, put his hand over her mouth and raped her.

On 60 Minutes, Jarratt describes the claim as a "ridiculous" story, which he resented having to respond to in court.

"The jury makes up their mind for what they hear, you know? So, and my truth will out."

Jarratt's truth was that he and his accuser had consensual sex as his wife slept in another room; in fact, he claimed the woman who accused him of rape was actually his seducer.

"One thing led to another," he told the court. "It was a form of seduction from her that I reacted to."

The court heard Jarratt had confessed his infidelity to Miano seven years after it took place.

It was a "painful" betrayal, Miano tells 60 Minutes, but she and her daughters stuck by Jarratt throughout the trial.